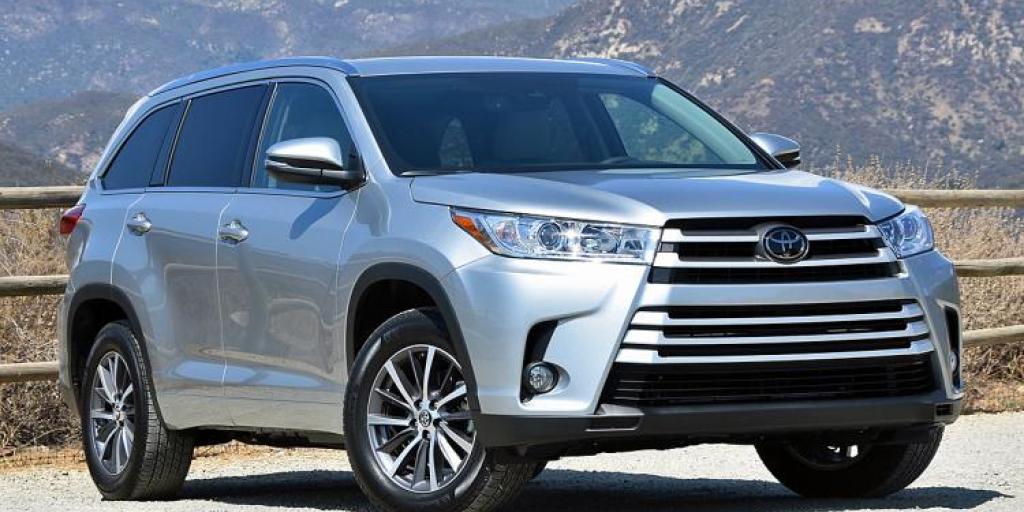 The Highlander has a well-deserved reputation for safety and reliability. With middle-of-the-road performance, 3-row seating, and fuel economy, it’s a solid choice in a crowded class. The standard advanced safety technology has the potential to propel the Highlander to new heights. If you’re looking for reliable, practical transportation for the whole family, this SUV is a great choice.

In 2016, the Highlander sold close to 200,000 units despite relatively low ratings from many critics. In an effort to appease the critics, Toyota restyled the body and made their Safety Sense P technology suite standard across all trims. The result is a better-looking SUV with class-leading safety technology and the same great dependability and functionality you’d expect from Toyota. At the time of this writing, Toyota is the only automaker to offer forward collision warning and automatic emergency braking standard across their lineup. The 4Runner is the lone exception, but it’s designed primarily for off road use. “Superior” rated safety technology provides value that’s difficult to quantify. It’s safe to say that it could possibly save your life. What could be more valuable than that?

The Highlander packs a 295 horsepower 3.5 Liter V6 on most trims that propels the SUV from zero to sixty in a spritely seven seconds. The 185 horsepower inline four in the base Highlander doesn’t provide adequate power for this 2 ton SUV. We wouldn’t recommend it. The V-6 is mated to an eight-speed automatic transmission that helps the Highlander achieve an EPA rating of 22 miles per gallon combined.

As a result, the transmission can be hesitant to downshift when you need power, so leave yourself extra room when passing. In the handling department, the Highlander falls short of benchmark SUVs like the Dodge Durango or Mazda CX-9. The soft springs absorb rough roads well but cause the body to toss to and fro when cornering. The electrically assisted power steering is quick if a bit detached. The driving dynamics are appropriate for the Highlander’s purpose: hauling a family from point A to point B.

The Highlander’s interior leans toward Lexus quality, a departure from the lackluster materials found in both the Sequoia and RAV4. There’s a soft-touch, padded and stitched dash, with some additional high-quality panels elsewhere, contingent on which trim you choose. Lower trims have some visible hard plastic that detracts from the upscale impression. All models receive a brushed aluminum-looking trim across the dash and around air conditioning vents that manages to look expensive rather than cheap, as it does in some other Toyotas.

There’s a shelf that runs across nearly the entire dash, a feature unique to the Highlander as far as we know. Another unique attribute is  “Driver Easy Speak” that uses a hidden microphone to amplify the driver’s voice in the rear. Great for getting your point across without having to yell. Reviewers rave about the Toyota’s high seating position that provides excellent visibility from all angles, except the rear corners. The wide D pillars are the culprit. At least an available blind spot monitoring system with rear cross traffic alert mitigates concern over poor rearward vision. This system is managed by the polarizing Entune infotainment system, available with either a 6.1-inch touchscreen or 8-inch touchscreen.

We say polarizing because some reviewers loved it and others hated it. Many enjoyed the analog volume and tuning knobs, missing in many modern SUVs. The configurable menu screens function like a smartphone, a feature appreciated by all. Things they didn’t like were the lack of Apple CarPlay or Android Auto, as well as fitful freezing and crashing of the system. Some models use app-based navigation that piggybacks your phone via the Scout GPS app and displays directions on the infotainment screen. While it’s awesome that this system is free, it does use your phone’s data and lots of it. There were also reports that it drained users' batteries quickly. You may wind up using Google or Apple maps as you probably did before.

Fortunately, there are several standard USB ports that charge swiftly. Bluetooth streaming audio is a mixed bag, when it works, it's great. You can browse your music library through the Entune system when it’s connected, removing the need to scroll through your phone to find your jams while driving. However, many complain that system freezes and reboots more often when using pairing. Seats are wide, supportive, and comfortable. All but the lowest trim have power lumbar and thigh support, which works well. The Highlander seats either seven or eight, depending on the seating configuration. The stock configuration in eight with two split-folding benches.

Higher trims receive second-row captain’s chairs, which can be replaced with a bench at no cost. The Limited trim is only available with captain’s chairs. The second-row bench slides, reclines, and folds to allow maximum flexibility when hauling. The third row can accommodate three children comfortably or two adults with the second row all the way forward. Fold the rear rows down for a cavernous cargo capacity of up to 83.7 cubic feet, 42.3 with the third row folded, and just 13.8 with all rows in use. Inside the Highlander is a pleasant place to be and many will find the fit for their family is just right.

The Highlander may not break any necks with its tasteful and conservative design but that’s exactly what many owners desire. Something subtle. Something practical, reliable, safe. The exterior reflects these values with a “no frills” aesthetic. The front fascia flaunts a chrome-finished grille with the Toyota badge above a large intake with a secondary grille that, together, form a large trapezoid. Complementing the wider intake are dual vents that may sport fog lights, depending on your selection of trim. Above, rather standard halogen projector beam headlights light your path and perfectly follow the lines created by the top grille, hood, and front fender.

The solitary line created by this combination extends to the rear, sloping upward ever so slightly. Below, a flared body line protrudes from the bottom of the SUV and about the rear fender. The B and C pillars are integrated into the window design, giving both the impression of one large side window, as well as the function of improved visibility. The rear fascia wears contemporary taillights and an archetypal roof spoiler. On top, there are low profile roof racks to provide the utility part of the equation. Depending on which trim is equipped, the Highlander sits on either 18 inch, 19 inch, or 20-inch wheels. The Highlander has an appearance to match its performance: functional, dependable, reserved. Disagree? Let us know what you think about the design in the comments below.

The NHTSA awards the Highlander with a 5-star overall safety rating, the highest offered. However, it’s worth noting that there are some disconcerting complaints of the airbags failing to deploy in serious accidents. There are several complaints filed with the NHTSA over the last few model years describing these horrific collisions. Although we know airbags would have drastically reduced the likelihood of serious injury, the fact that these owners were alive to tell their stories despite the failure of deployment is evidence of impressive engineering by Toyota.

Many of these models were equipped with the TAKATA airbags that have been infamously recalled, so it may be safe to assume the problem has been resolved for 2017 year models or if the recall has been performed by a Toyota dealer. If you’re not aware, you can run the VIN of the vehicle you’re considering purchasing through the NHTSA website to check if the issue has been resolved in that particular vehicle. The Insurance Institute for Highway Safety extends exceptional ratings to the Highlander, including the prestigious “Top Safety Pick+” classification. This, of course, means the Highlander received “GOOD” ratings across the proverbial crash test board. The standard front crash prevention technology included in Toyota Safety Sense P receives the maximal rating of “SUPERIOR.” The totality of these ratings and research suggest the Highlander is an eminently safe SUV, capable of protecting you and your loved ones.

Many of the complaints issued by the National Highway Traffic Safety Administration for the third generation Highlander are for minor electrical issues and infotainment issues like freezing or failure to pair. There are few mechanical complaints. If you’re buying used, stick with the third generation, the second generation has a problematic VVT-i oil line that is known to be defective. If it ruptures while driving and if you continue to drive, you’ll have complete engine failure. We’d stay away from this generation unless you’re mechanically inclined or know for certain the defective line has been replaced. We’d highly recommend the most recent few year model Highlanders as highly reliable SUVs, so long as you are prepared to deal with intermittent Entune functionality.

Most car shoppers considering the Highlander will undoubtedly consider the Honda Pilot as well. We think it’s one tough competitor. A lot of critics point to the standard safety features in the Highlander and are quick to declare it the winner, but the base Highlander has an anemic 4 cylinder that struggles to motivate the midsize SUV with any meaningful zest. You can purchase an EX-trim Pilot with the Honda Sense safety suite for the same price as a base Highlander with a V6 and AWD or less than the LE Plus trim. Besides Toyota’s Safety Sense, the Pilot provides many more features standard than the Highlander, including Apple CarPlay and Android Auto that are unavailable in the Toyota. However, many will prefer the traditional turn knob controls in the Highlander to the Pilot’s tricky touch-based controls.

The Honda wins when it comes to seating, with perhaps the only adult friendly third row available in the segment. In addition, the seats are more comfortable and supportive, though the Highlander’s second-row captain’s chairs are a close second. With all rows in use, the Pilot has a few more cubes of cargo space. Fold the back rows and you get roughly the same amount of overall cargo capacity. From the exterior, both sport similar, conservative designs, presumably for mass market appeal. Neither really stands above as the better-looking SUV. Behind the wheel, it’s a different story! Despite the same sized V6, the Pilot is a second quicker to sixty at 6.2 seconds.

The suspension and steering are likewise equipped for more spirited driving. It won’t be setting a hot lap time anytime soon but it’s a far cry from the Highlander’s soft sprung suspension. Choosing between these two SUVs is a tough choice and we suggest you drive them both before you make your decision. We prefer the driving dynamics of the Pilot, but we know this isn’t the only category that matters. Let us know what you think below!