The Consumer Electronics Show in Las Vegas has long been an opportunity for automakers to show off their most technologically advanced and futuristic vehicle concepts and ideas. While the show has looked different in recent years, it continues to bring the all-electric SUV heat. We have a roundup of the SUV news out of CES 2022 for you below! 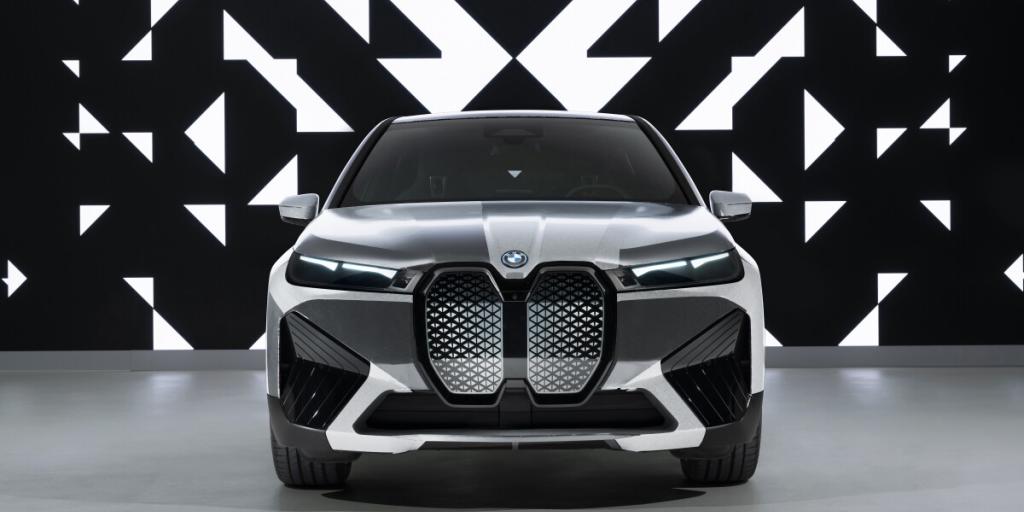 The BMW Group unveiled its third, even more powerful model variant of its flagship EV at CES 2022: the BMW iX M60. The all-electric iX M60 packs a total of 610 horsepower and with Launch Control engaged, makes 811 lb.-ft. of torque. The iX M60 can reach 60 miles per hour in just 3.6 seconds, and it has a top speed of 155 miles per hour.

Like the 516-hp iX xDrive50, the M60 is all-wheel drive with an electric motor on each axle. Adaptive air suspension comes standard on the iX M60, though.

The BMW Group also debuted the BMW iX Flow featuring E Ink at CES 2022. The surface of the vehicle can vary its shade at the driver’s prompting — you can think of it as the same technology used in the displays of e-readers such as the Kindle.

The fluid color changes of the BMW iX Flow are made possible by a specially developed body wrap that is tailored precisely to the contours of the all-electric vehicle. When stimulated by electrical signals, the electrophoretic technology brings different color pigments to the surface, causing the body skin to take on the desired coloration!

“The BMW iX Flow is an advanced research and design project and a great example of the forward thinking that BMW is known for,” said Adrian van Hooydonk, head of BMW Group Design.

BMW says new technologies such as E Ink will provide a whole new level of decision-making freedom for drivers in the future.

“This gives the driver the freedom to express different facets of their personality of even their enjoyment of change outwardly, and to redefine this each time they sit into their car,” said Stella Clarke, head of project for the BMW iX Flow featuring E Ink. “Similar to fashion or the status ads on social media channels, the vehicle then becomes an expression of different moods and circumstances in daily life.”

The BMW Group also previewed its massive BMW Theater Screen at CES 2022. It has Amazon Fire TV built-in and the 31” ultra-wide display with resolution up to 8K brings a true cinematic experience into the vehicle. Rear passengers will be able to stream videos, listen to music, and watch downloaded programs, all while on the road. The screen can also be titled to the comfort level and liking of the passengers. 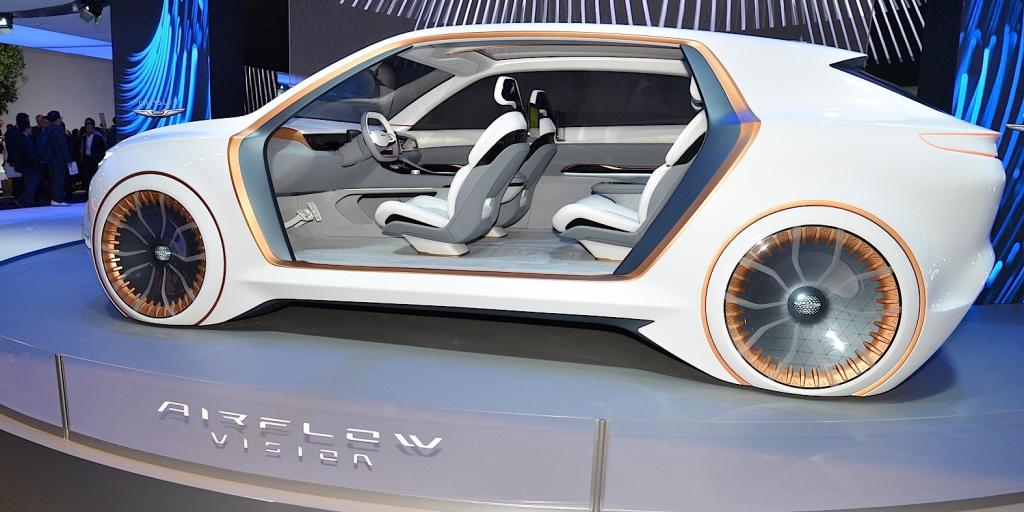 People have been wondering what has been going on with Chrysler, and Stellantis has unveiled that Chrysler will have an all-electric lineup by 2028. Three new Chrysler EVs are also said to be on the way. The Chrysler Airflow Concept was fully revealed at CES 2022 in Las Vegas, an all-electric crossover that features a futuristic interior. It delivers up to 400 miles of range.

“The design features a decisively elegant aerodynamic exterior and a modern, sophisticated interior that takes the customer on a new level of digital delight,” said Ralph Gilles, chief design officer.

The technology inside the modern and spacious Airflow Concept is impressive, including the seamlessly connected STLA SmartCockpit. Using a menu-based format, the infotainment screens throughout the Airflow interior can be personalized, simplified, and grouped based on individuals and interests. Information on the screens can be shared with all passengers by swiping. Each screen is a personalized space to access the digital world via connected entertainment, apps and downloads. Each seat also features a built-in camera, enabling occupants to participate in a group video conference call from the comfort of the Airflow cabin.

The Chrysler Airflow Concept is equipped with STLA AutoDrive, which delvers Level 3 autonomous driving capabilities and will be upgradable via OTA updates. 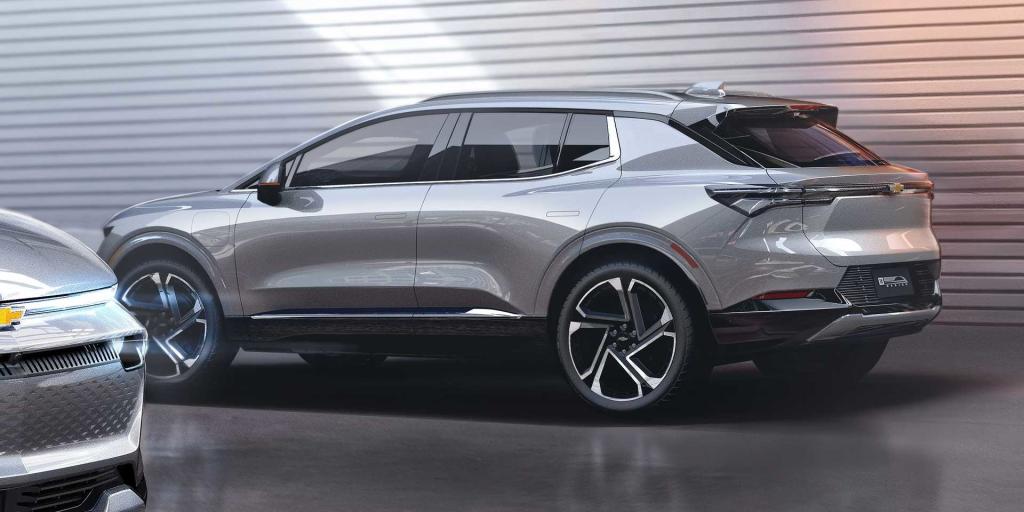 General Motors Chair and CEO Mary Barra confirmed during her virtual keynote speech at CES 2022 that the automaker would introduce the 2024 Chevrolet Equinox EV and Chevrolet Blazer EV sometime in 2023. The presentation including a few images of the Equinox EV, which showed a sleek and sporty look for the crossover. It will reportedly start at around $30,000.

“The Equinox has always played an important role for Chevrolet as the second-highest selling brand nameplate,” said Steve Hill, Chevrolet vice president. “Providing an affordable EV option in the industry’s highest-volume segment proves Chevy is going to make EVs available to everyone.” 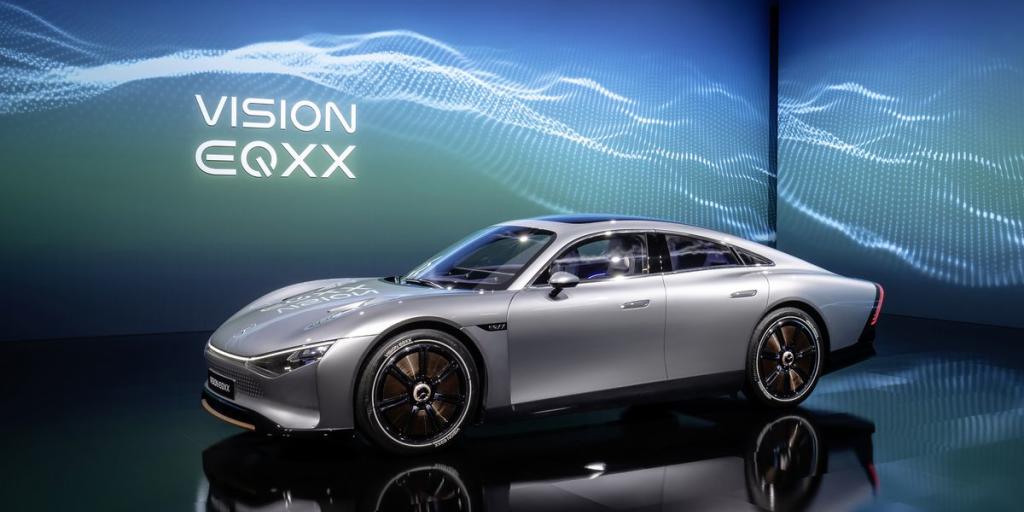 While not an SUV, Mercedes-Benz unveiled its Vision EQXX as part of CES 2022. It’s worth mentioning because the company says it's the most efficient Mercedes-Benz ever. It delivers an impressive 620 miles of range on a single charge! This is due in part to the vehicle’s exterior design and aerodynamics, which achieve a benchmark drag coefficient of 0.17.

“The irresistible bodywork takes the revolution further: the Vision EQXX demonstrates precisely what will make an electric vehicle a Mercedes-Benz in the future, with lightweight design, battery innovations and new materials,” writes Mercedes-Benz.

The company says the concept electric car will act as a “technology blueprint for series production.”

A dedicated team of Mercedes-Benz engineers worked with the motor-racing specialists from High Performance Powertrains and Mercedes-Benz Grand Prix to develop the concept’s highly efficient and compact electric powertrain and lightweight battery housing.

Instead of just making the battery bigger and thus heavier, the energy density has been significantly improved — to 200 Wh/kg to be precise. The electric system, which supplies power to many of the auxiliary units in the Vision EQXX, also draws additional energy from solar cells on the roof. That reduces the energy demands on the high-volt system, and ultimately leads to more range.

It’s impressive technology all around, and we’re already looking forward to next year’s Consumer Electronics Show to see what else automakers have in store!