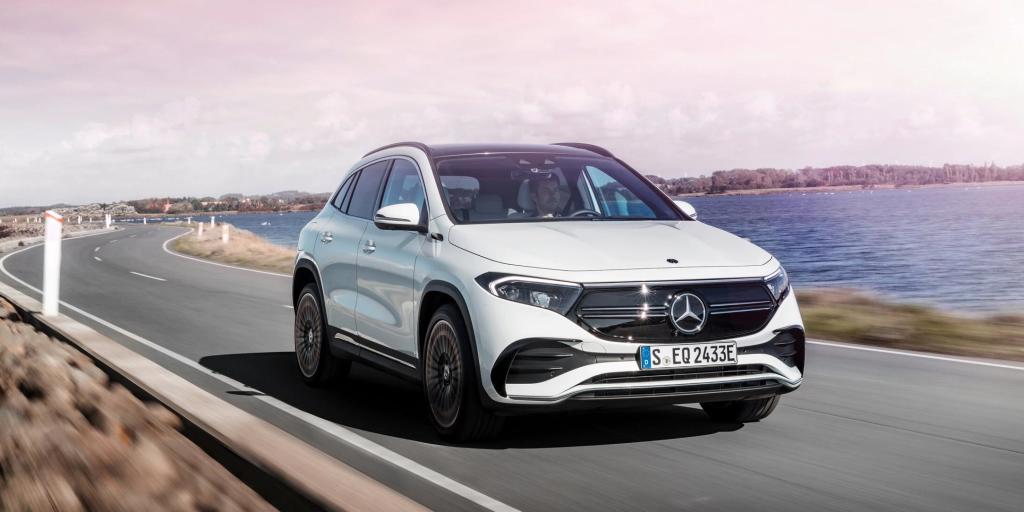 Mercedes-Benz is looking to better compete with Tesla and on January 18, the company unveiled a new electric compact crossover called the EQA. It’s the first of several electric models that the automaker plans to launch in 2021. Mercedes says its new EQA is similar to the GLA in that it delivers all the thrilling characteristics of that vehicle, but with an efficient electric powertrain. While the EQA was originally going to be based on the A-Class hatchback, Mercedes decided to use the GLA-Class as the basis for the vehicle because of the shift in consumer trends toward SUVs.

“Progressive design and intuitive operation are two of the highlights of the EQA,” said Britta Seeger of Daimler AG and Mercedes-Benz AG. “With this car, for the first time we are offering our customers an all-electric Mercedes in the compact segment with an extensive range that ensures its viability in everyday use. As such, the new EQA is an important vehicle along our path towards the electrification of all our vehicle segments.”

The Mercedes-Benz EQA is set to go on sale in Europe in the spring of 2021. While it’s unclear whether the EQA is bound for the United States, we wouldn’t be surprised to see it be brought here because of the growing popularity of electric SUVs.

The vehicle is being launched as the EQA 250, though Mercedes says there will eventually be a whole family of EQA models offered in both front-wheel and all-wheel drive. The EQA 250 will offer a range of 265 miles. It has a single electric motor at the front axle rated at 188 horsepower and 276 lb.-ft. of torque. The “double-decker” lithium-ion battery of the EQA sits in the floor and forms part of the vehicle’s structure. It can be charged from 10 to 80 percent in about a half hour.

Complex measures were taken to isolate the electric powertrain from the chassis and body so that the EQA meets the high standard of noise and vibration comfort that has become a hallmark of the Mercedes-Benz brand. Numerous damping measures enhance the effect.

Mercedes says that in good time, buyers will be able to opt for an EQA that offers over 268 hp and more than 300 miles of range.

“The EQA proves that, by using tried and tested architecture, it is possible to achieve an excellent compromise between performance, costs and time to market,” said Markus Schafer of Daimler AG and Mercedes-Benz AG.

To learn even more about the new electric compact crossover from Mercedes, keep reading below! 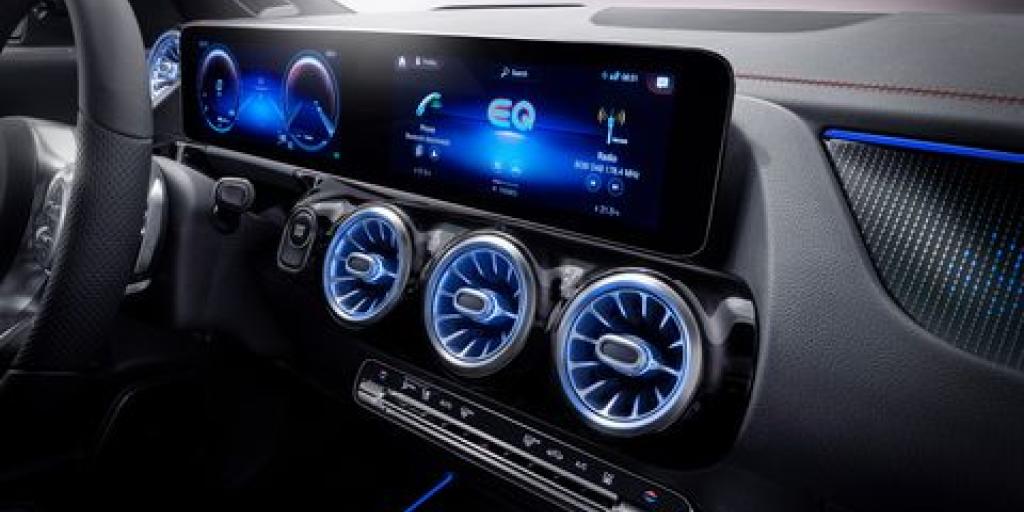 The EQA looks incredibly similar to the second-generation GLA, but it does have electro-aesthetics that set it apart like the sealed-off black panel radiator grille for improved aerodynamics and also the unique wheel pattern that’s offered in up to 20 inches in diameter and can also be ordered in rose gold or a blue decorative trim. A further distinctive design feature of the all-electric world of Mercedes-EQ vehicles is the continuous light strip at the front and rear. A horizontal fiber-optic strip connects the daytime running lights of the full-LED headlamps. Mercedes says the inside of the headlamps are finished to a high level of quality, detail, and precision, and the blue color highlights within the headlamps further reinforce the signature Mercedes-EQ appearance. The LED tail lamps merge seamlessly into the tapered LED light strip, thus underlining the impression of width.

As for the interior design, there’s a new-style back-lit trim element and also rose gold-colored decorative trim on the ventilation outlets, seats, and the vehicle key. The Edition 1 special model additionally features perforated leather seats, through which blue fabric can be seen. The instruments, with their electric car-specific display, pick up on the same color scheme with rose gold-colored and blue highlights. The seating position is high and upright, as is typical for an SUV. That makes getting in and out of the EQA more comfortable, and is also good in terms of all-round visibility. The rear seat backrest is 40:20:40 split-folding.

The highly advanced MBUX infotainment system, meanwhile, is included as standard. It can be individually configured with the help of various options. Key advantages of the system include its powerful computer, brilliant screens and graphics, a customizable presentation, optional full-color head-up display, and also standard navigation with electric intelligence. 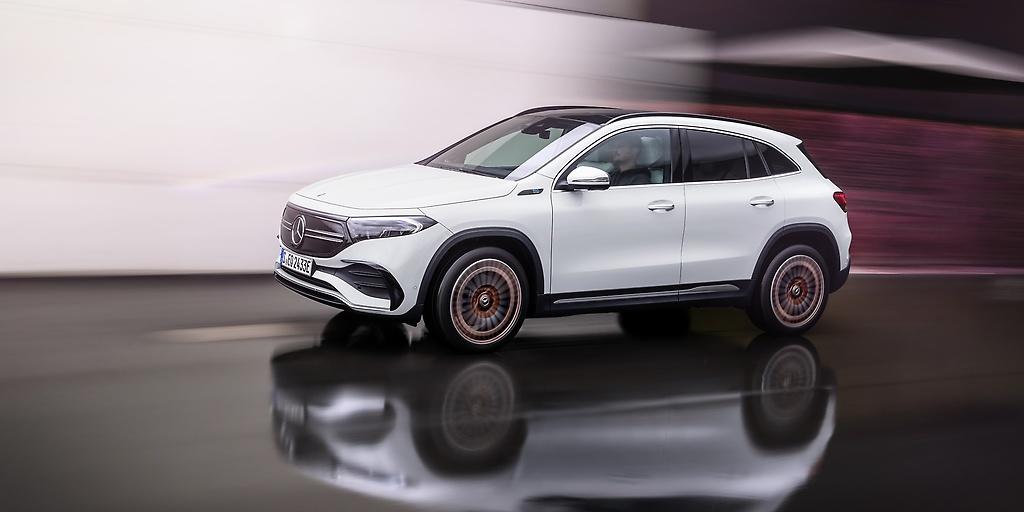 Mercedes says that adding to the general ease of using the EQA on a day-to-day basis is that standard feature of navigation with electric intelligence. It calculates the fastest route to your given destination to help get you where you need to go quickly and with ease.

“On the basis of continual range simulations, the systems make allowance for any necessary charging stops as well as for numerous other factors, such as the topography and the weather,” writes Daimler AG on its website. "It is also able to react dynamically to changes, for instance in the traffic situation or personal driving style.”

Safety systems that come standard with the EQA include Active Lane Keeping Assist and Active Brake Assist. There’s also a whole slew of other systems that help protect what matters. 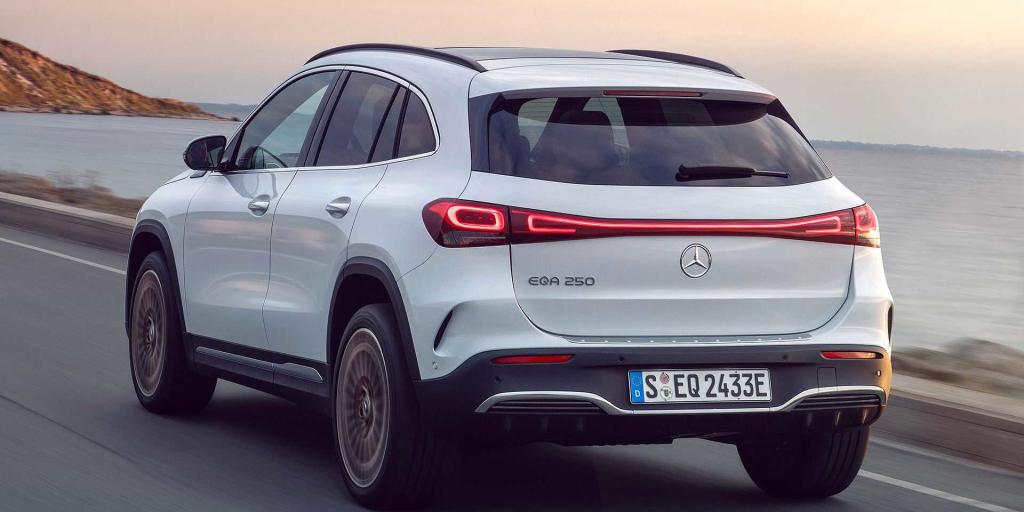 Executives at every major automaker are scratching their heads, trying to figure out how to better compete with Tesla and it’s quite clear that Mercedes wants its piece of the electric vehicle market pie. The second-generation GLA SUV was welcomed with great fanfare, and so it also comes as no surprise that Mercedes chose to base its new EQA off the GLA.

There are also reports that Mercedes plans on electrifying its new GLB SUV, as well as the iconic G-Class. While some predict the electric version of the GLB will arrive in America before the EQA, the GLA is quite popular and so we’ll have to wait to see if the EQA that’s based off of it makes its way here first.

Don’t forget, we recently reviewed the second-generation 2021 GLA on YouTube! Be sure to head over there to check out our full video review of the vehicle to help you get a better sense of what the new EQA might look and feel like.