Several concept sport utility vehicles made a major splash at the 2017 North American International Auto Show in Detroit. Here at SUVs.com, we reported on the Infiniti QX50 and Audi Q8 concepts, which both debuted at the show. There were at least two other SUV concepts on display, however, that also deserve some attention. While they both originally debuted at other auto shows before the 2017 event in Detroit, the NAIAS was still the first time for many members of the media and car enthusiasts to get a look at the vehicles. So while they may have not grasped headlines like the other SUV concepts did, they still impressed many. They are the Lexus UX and Lincoln Navigator concepts. Both come with standout features that make you take a second look. 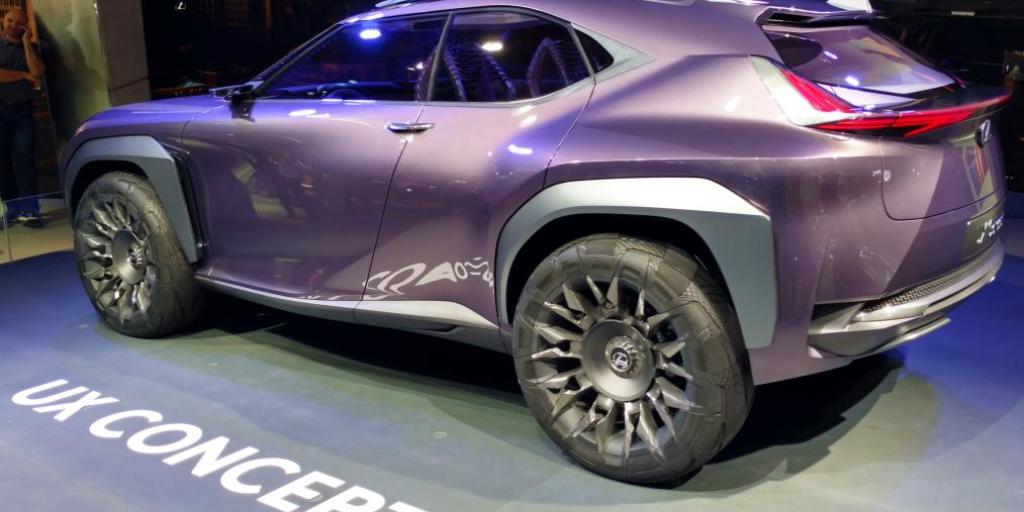 The Lexus US concept vehicle made its first North American appearance at this year’s Detroit auto show. It originally appeared at the Paris Motor Show in September 2016. It’s an aggressive looking crossover with a low ground clearance and a couple-like driving position. It represents Lexus’ vision for a compact SUV of the future. Upon first glance, the UX concept stands out with its square wheel arches and unique, 21-inch wheels. It looks like something straight out of a comic book movie. The grille is also incredibly unique and almost psychedelic looking. It’s a bit mesmerizing. Lexus says the whole volume surrounding it, not just the grille itself, creates the identity of the vehicle. The company says the concept vehicle’s key external elements are linked together by, “highly sculptural, sensual surfacing reminiscent of a classic sports car.” Even the body color was designed to emphasize the vehicle’s shape. “In the absence of character lines, the multi-layered depth of the newly-developed Immersive Amethyst paintwork serves to highlight volume changes, giving definition to the sculpture and expressing the car as a volume rather than simply a line-oriented design,” writes the company. Lexus says there’s a strong synergy between exterior and interior styling. 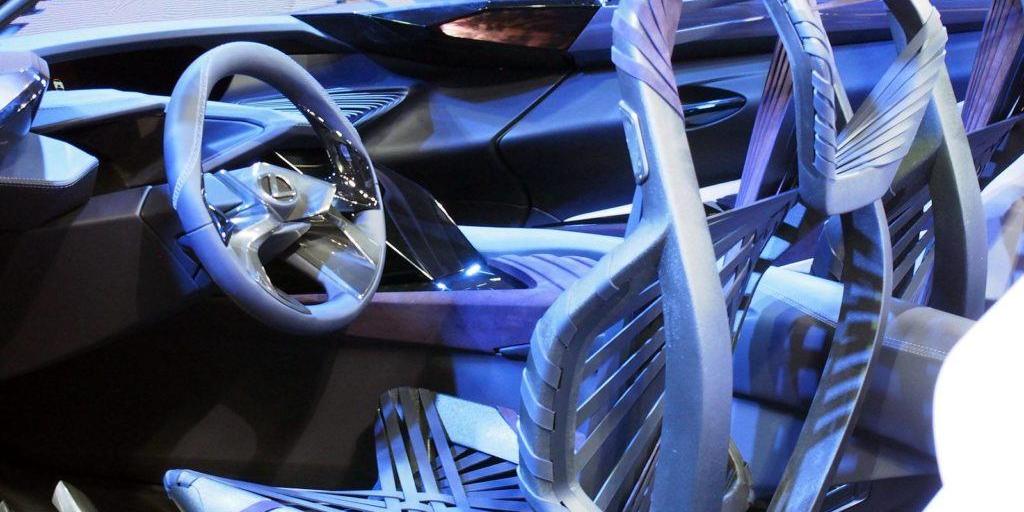 “To the front, the fenders flow seamlessly into the cabin to form housings for e-mirror screens showing the image from door-mounted, rear facing cameras. The dashboard top sits lower than these screens to combine a deconstructed look with excellent forward visibility,” writes the company. “To the rear, the bodywork again flows into the cabin, here forming the main structure of the rear seat headrests.” The seats are a key part of the interior’s design and are the first interpretation of Lexus’ breakthrough Kinetic Seat concept. The seat cushion and back rest are able to move kinetically with occupant weight and external forces. Lexus says it provides a more comfortable driving experience. Not to mention, the seats are incredibly cool looking. They almost look as if they’re fit for a supervillain. The deconstructed dashboard, meanwhile, is far from traditional. It even features a demountable sound bar built into the passenger side. To say the concept vehicle is something to marvel at would be a gross understatement. 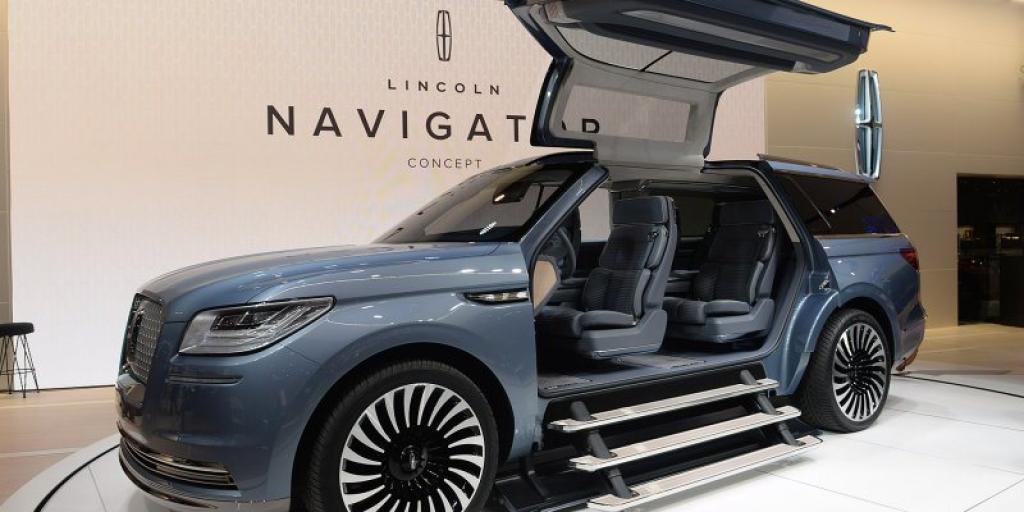 You may be more familiar with the Lincoln Navigator concept than the Lexus UX. That’s because it has made more appearances at auto shows in North America. It was originally unveiled at the New York Auto Show in March 2016. It was then on display at the Los Angeles Auto Show in November. Most recently, though, folks in Detroit had a chance to get a look at it. Like the UX concept, the vehicle has features that certainly make it stand out. For example, the full-size SUV has massive gullwing doors that make it look like something straight out of the future. It also has three steps that unfold to help people easily climb into the vehicle. There’s even a special lighting sequence that welcomes passengers as they approach. While the Lincoln Motor Company says the Navigator concept hints at what’s next for its best-known nameplate, it’s unlikely those wild features will end up in the production version of the vehicle. Still, the concept vehicle proves that the new Navigator will be much different than the current one. The design team at the Lincoln Motor Company says that when it comes to the Navigator concept, it was inspired by luxury yachts and sailboats. The company says the influence can be seen in the vehicle’s modern lines, Storm Blue exterior and detailing throughout. “Lincoln Navigator concept reinforces our commitment to give every Lincoln client what we call quiet luxury – vehicles and experiences that are elegant and effortlessly powerful,” said Kumar Galhotra, president of the Lincoln Motor Company. “Quiet luxury is what sets Lincoln apart. We’re showing fans of large SUVs how we can exceed their expectations, without being the loudest statement on the road.” It’s Lincoln’s most spacious interior yet. So spacious that at the rear, there’s even room for another unique feature. It has a custom wardrobe management system. There are also six Lincoln-patented Perfect Position Seats. They adjust a whopping 30 ways to help make passengers feel comfortable on even the longest of rides. The driver’s seat, meanwhile, includes independent deployable thigh support. On the back head restraints, there are monitors that offer passengers Wi-Fi connectivity. A special audio system, meanwhile, helps blare out the music that passengers are able to wirelessly share. When it comes to performance, the concept features a 3.5-liter twin-turbo V6 engine that delivers more than 400 horsepower. Drivers are able to choose from several drive modes that are designed to improve ride and handling. The modes affect steering, suspension and noise levels. A 360-degree camera that’s actually made up of four cameras helps make parallel and perpendicular parking less stressful. Enhanced park assist features also help on that front. The Navigator concept’s safety features, meanwhile, include Pre-Collision Assist with Pedestrian Detection and a lane-keeping system that vibrates the steering wheel if they veer off path. The Lincoln Navigator and Lexus UX concepts are both something to write home about. We’re certainly excited to see what the future will bring and how the concept vehicles’ design elements are incorporated in future vehicles.