Jaguar is going after its piece of the electric vehicle market. It revealed its I-Pace concept ahead of the Los Angeles Auto Show with an exclusive VIP reception on November 14 at MILK Studios. Jaguar calls it one of the most “visually arresting” concepts it has ever produced. While it’s a concept now, the I-Pace won’t remain one for long. That’s because Jaguar says the production version will be revealed in late 2017 and will hit the road in 2018. The company’s first-ever electric vehicle will directly compete with the Tesla Model X. The company describes the I-Pace as bold, brave and undeniably beautiful.

Jaguar certainly went big with the reveal of its first-ever electric vehicle. Actress Michelle Rodriguez, late night talk show host James Corden, supermodel Miranda Kerr and several other celebrities took part in the reveal that transported members of the audience into a virtual world to explore the concept SUV. The company says it was the largest ever live and connected virtual reality event of its type. By wearing VR headsets, the celebrities and others were put inside the concept car and able to interact live with other participants. They ‘sat’ on the concept’s virtual seats and got a chance to see the concept as it was built piece by piece around them. The company believes it was the perfect way to introduce its electric SUV concept. 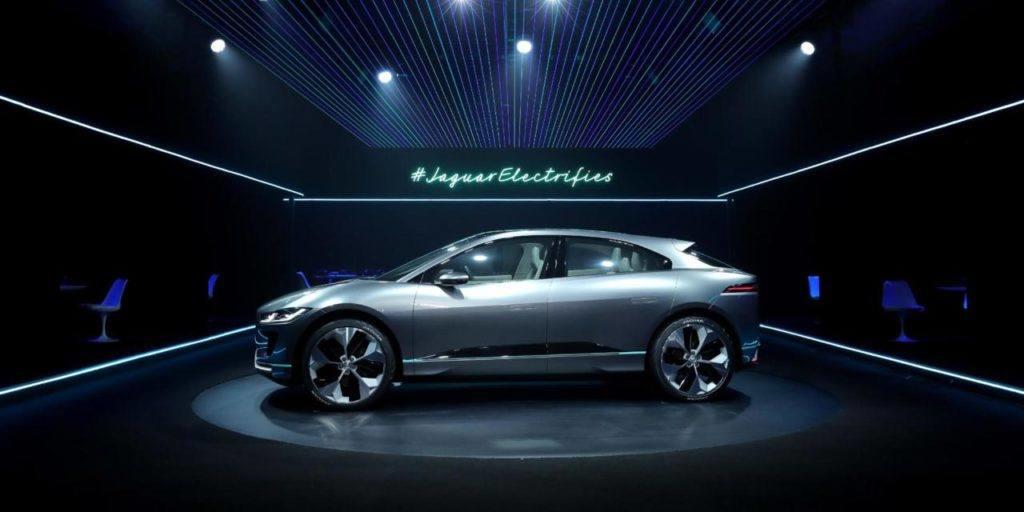 The Jaguar I-Pace concept is a bit smaller than its wildly popular sibling, the F-Pace. It features a cab-forward design inspired by the C-X75 supercar with the smooth silhouette of a coup. The company believes it’s just the bold vehicle design consumers want. “With the I-PACE Concept, the revolution is in the profile, not the design language. The profile is possible because this car is electric. It’s not just that we wanted to create something that was very different from anything else we do: we wanted the design to celebrate the new battery electric technology,” said Ian Callum, director of design for Jaguar. The I-Pace’s long, 117-inch wheelbase makes it more aerodynamic and enlarges the interior space. Its muscular wheel arches are sculpted around 23-inch Nighthawk wheels in Technical Grey with Gloss Black inserts. Jaguar says the powerful rear haunches further enhance the I-Pace’s “sports car-like poise.” In the front, there’s a broad, distinctive grille with a hexagonal grid in gloss black. In the rear, there’s a LED stop lamp that’s visible only when the driver brakes.

Jaguar says the five-seater I-Pace concept’s cab-forward design offers a level of space and rear knee room usually only found in full-size SUVs. “The electric powertrain and the cab-forward layout positions the driver further forward, increasing the space for row-two occupants," said Callum. "This also allows the 530-litre luggage compartment volume without compromising the dramatic silhouette." The driver and passengers sit lower in the I-Pace than in conventional SUVs. Jaguar says it provides a “sports car’s sense of connection with the road.” Windsor leather covers the front of the slimline perforated seats. A full-length panoramic glass roof floods the interior with natural night. At night, LEDs embedded in the roof illuminate the patterned glass to create a stunning effect. The I-Pace’s interior certainly isn’t short on fancy details. Using a laser-cutting process, Jaguar’s signature lozenge pattern has been applied onto the seat cushions. Labels with Jaguar paw prints can also be found stitched into the seams of the seats. The I-Pace introduces Jaguar’s new intuitive ‘flightdeck’ approach to the cockpit, featuring three screens. There are two touchscreens in the center console. The larger of the two is a 12-inch TFT display while a secondary, 5.5-inch display is located below it. It allows occupants to configure infotainment and climate while keeping full screen information on the larger display above. There’s also a full-color head-up display that discreetly displays key information on the vehicle’s windshield. Just like the infotainment systems in Jaguar’s production cars, the I-Pace features a Wi-Fi hotspot. It helps keep passengers connected during long drives. Occupants can also use apps on their iOS and Android smartphones through the vehicle’s main touchscreen using InControl Apps. It includes a unique Spotify app that provides song recommendations for you to listen to. The I-Pace offers 18 cubic feet of cargo room in the rear. The front luggage compartment under the hood offers an additional 1.2 cubic feet of space. 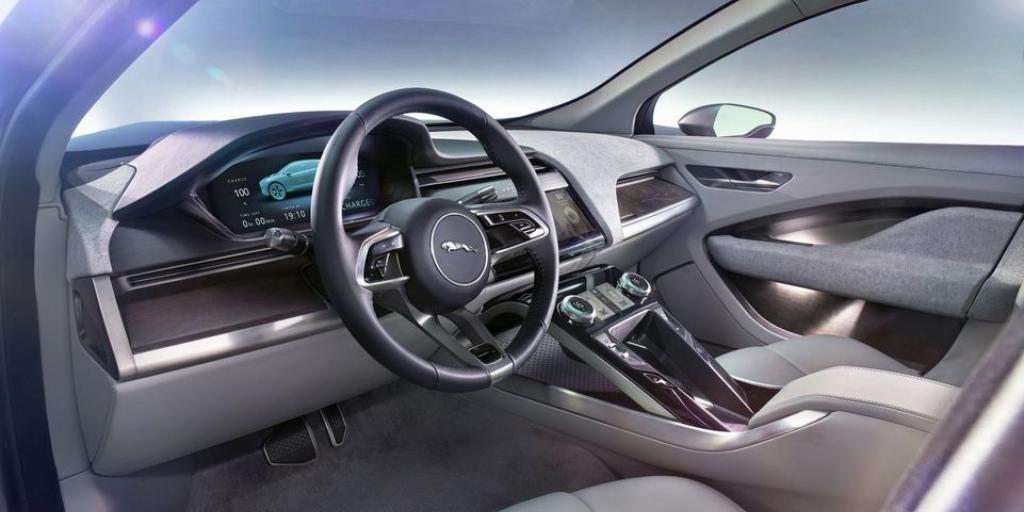 The I-Pace features two compact electric motors integrated into the front and rear axles. They were designed by Jaguar Land Rover. Combined, they churn out 400 horsepower and offer 516 lb.-ft. of torque. They help the vehicle go from 0-60 mph in around 4 seconds. They also enable all-wheel drive. The company says its unique traction technologies, including All Surface Progress Control and Adaptive Surface Response, enhance the inherent benefits of all-wheel drive and help the driver keep the vehicle in control. The I-Pace’s range is more than 220 miles with its liquid-cooled 90kWh lithium-ion battery pack. Jaguar says with an average daily commute of 25 to 30 miles, drivers will only have to charge the car once a week. It can be charged at public charging stations, a dedicated wall box at home or by using conventional domestic power sockets. Using a 50kW DC rapid charger, it takes the vehicle 90 minutes to achieve 80 percent charge and just over two hours for a full charge. “Electric vehicles are inevitable – Jaguar will make them desirable. Zero emission cars are here to stay and the I-PACE Concept is at the cutting edge of the electric vehicle revolution,” said Ian Hoban, vehicle line director for Jaguar Land Rover. 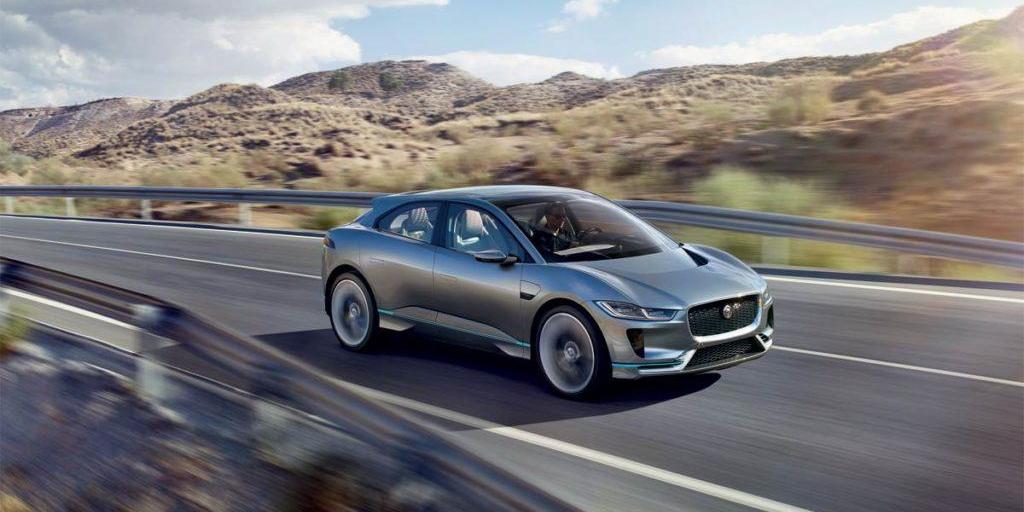 Interest in electric vehicles continues to grow and given the popularity of the F-Pace, it makes perfect sense for Jaguar to bring an all-electric performance SUV to the market. While pricing was not released by the company, we do know the I-Pace will hit the road in 2018. Customers can register now to be one of the first I-Pace owners. We’re sure many are jumping at that opportunity!