It’s official! After much speculation with regards to what Volkswagen would name its new crossover, the 2018 Atlas was debuted at a media event in Santa Monica on October 27. The company’s bold three-row SUV was unveiled on the Santa Monica Pier at the end of historic Route 66. It’s also set to be on display at the upcoming 2016 LA Auto Show. “This is the biggest and boldest Volkswagen we have ever built in the United States, delivering the distinctive design and craftsmanship we’re known for, now with room for seven,” said Hinrich J. Woebcken, CEO of Volkswagen’s North American region, in a press release. “The Atlas marks a brand new journey for Volkswagen to enter into the heart of the American market.” Volkswagen hopes the American-centric vehicle wins over consumers. Unlike the company’s other two SUVs, the Touareg and Tiguan, it has a pronounceable name. It’s an aspect the company considered important when thinking about how to better market the midsize SUV to the American public. It was actually Volkswagen’s North American team that picked the name. Typically, a committee in Germany would have done so. With its easy to pronounce name, bold look and room for the entire family, Volkswagen hopes the 2018 Atlas has what it needs to lift the brand up and distance it from its crushing diesel emissions scandal. 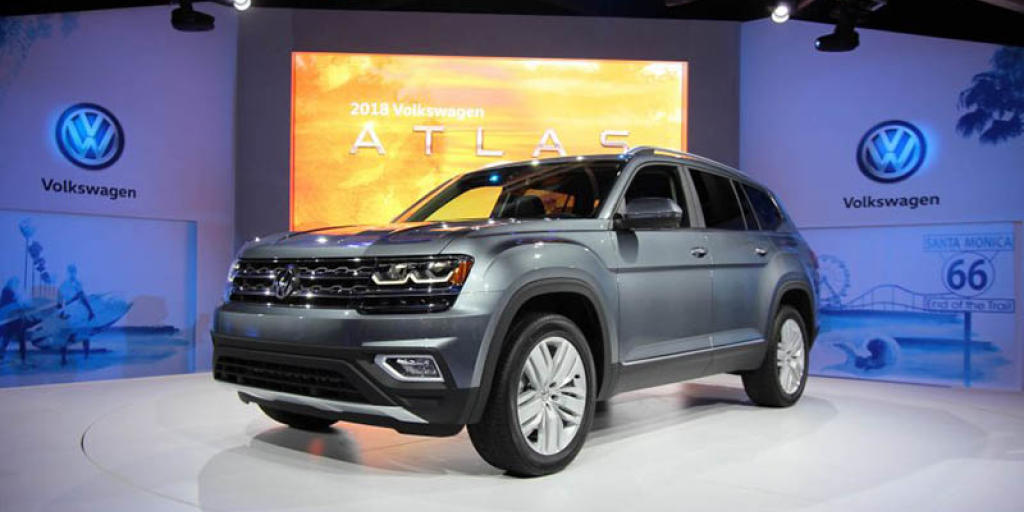 While the Atlas is the largest Volkswagen ever assembled in the United States, it retains classic proportions and clean lines. It’s based on Volkswagen’s Modular Transverse Matrix architecture. The vehicle is 198.3 inches long, 77.9 inches wide and 69.6 inches high. It has prominent wheel arches and lots of masculine lines. In the front, there are standard LED headlights to go with its bold, two-bar grille. Optional LED taillights help complete the look.

The Atlas’ interior features driver-centric displays that the company says enhance the feeling behind the wheel. Volkswagen Digital Cockpit is also available for drivers who like being able to reconfigure how they view vehicle information. There’s space for seven adults in the Atlas with room for two in the third row. The company says accessing that third row is easy. Seats also fold to make room for luggage in the back. Drawings of the Atlas show a kayak and paddleboard being able to fit in the vehicle’s rear when its third and second rows are folded down. The company’s executives say it’s just what an American family needs. “It’s a car to take the family and transport them to a national park or a state forest or to their lake house, let’s say, or maybe go skiing on a weekend,” said Jim Burch, Volkswagen of America product manager, in a video posted online by Volkswagen about the Atlas’ background. “So this car fits in perfectly to that active lifestyle, this culture where Americans just want to get out and experience the U.S. and all its beauty and this is a car that caters to that lifestyle and mentality.” 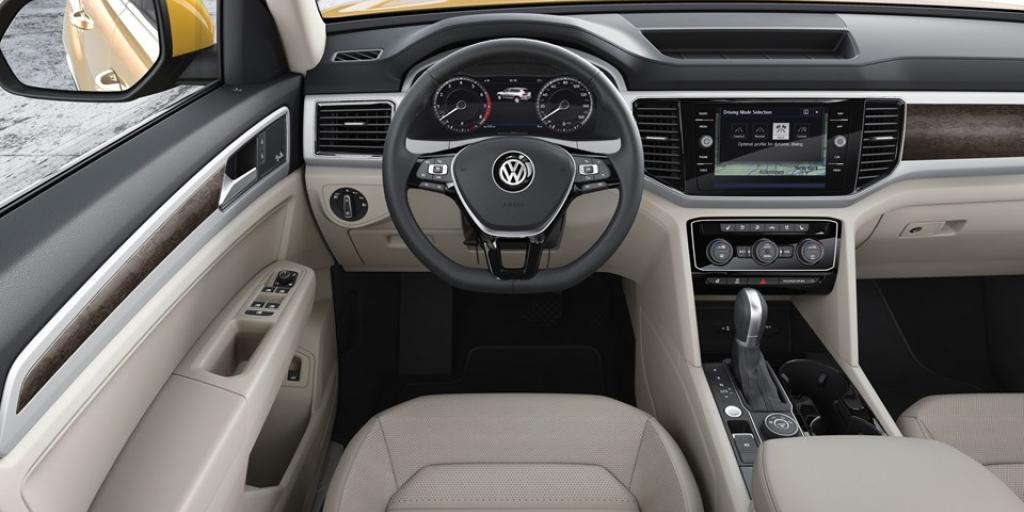 Connected vehicle services are available with Volkswagen’s Car-Net system. It includes technology that offers integration with apps such as Apple CarPlay, Android Auto and MirrorLink. When it comes to listening to music, the vehicle has its Fender Premium Audio System available. The company calls the system its most sophisticated yet with 12 channels, a 480-watt amplifier and 12 speakers.

There are two powertrain options for the Atlas. There’s a 2.0-liter turbocharged direct-injection four-cylinder that offers 238 horsepower. There’s also a 3.6-liter VR6 engine that packs 280 horsepower. Both powertrains come with an eight-speed transmission. The six-cylinder model comes with the option of Volkswagen’s 4Motion all-wheel drive system. The system features driving mode selection for different road conditions. The company says EPA fuel economy estimates are not currently available, but will be released prior to the SUV’s launch in spring 2017. 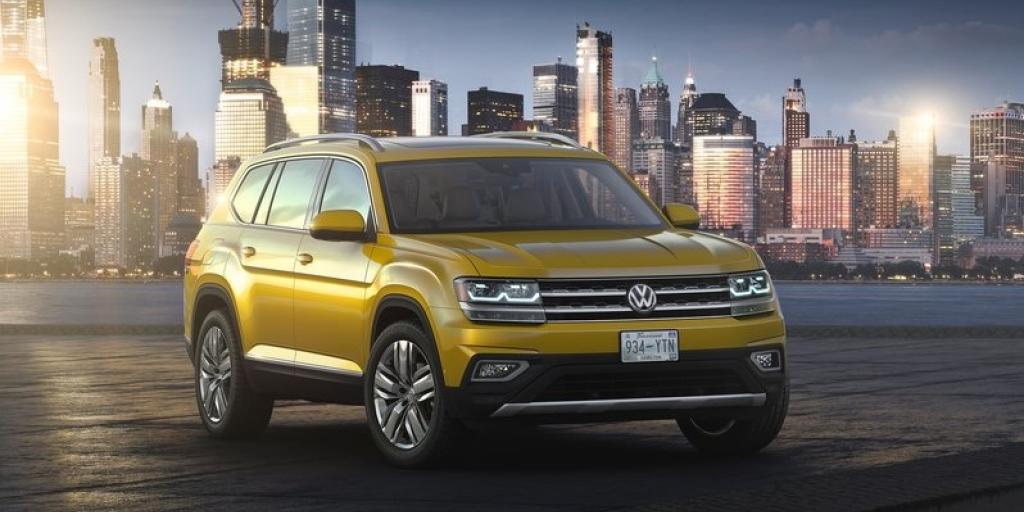 Volkswagen looked to set the 2018 Atlas apart with its safety features. The company says it’s the only vehicle in its class to offer an automatic post-collision braking system. The unique system applies the brakes as soon as the airbags are deployed in order to prevent the SUV from slamming into something else after initial impact. It’s based on the premise that a collision is rarely a single action. The company says this system helps reduce the chance of additional damage. Other safety features include adaptive cruise control, automatic braking, forward collision warning, lane departure warning and parking steering assistant.

Volkswagen certainly has a lot on the line. The company continues to suffer from its diesel emissions scandal which dates back to 2014. That’s when a non-profit first discovered irregularities in Volkswagen cars. Researchers found that some of the company’s vehicles emitted almost 40 times the permitted levels of nitrogen oxides under the Environmental Protection Agency’s Clean Air Act. While the company has acknowledged it has a lot of work to do to revive the brand in the United States, executives believe it still deserves a place at the table. “The market here in America is so big and the Volkswagen brand fits so perfectly into this market, especially with the heritage of the brand going back to the Beetle and the Microbus,” said Woebcken in the video the company posted online just days before the Santa Monica unveiling. “It’s a great opportunity to continue that story on a broader and stronger basis.” While one vehicle certainly will not be able to life the entire brand up, it may help the company build back its reputation with American consumers. It will be built alongside the Passat at the Volkswagen assembly plant in Chattanooga. It will come in five trim levels and the company says it will be priced for the heart of the competitive SUV market. While the media was able to get a close-up look at the midsize SUV in Santa Monica, lots more will get a chance to view it at the upcoming 2016 LA Auto Show. 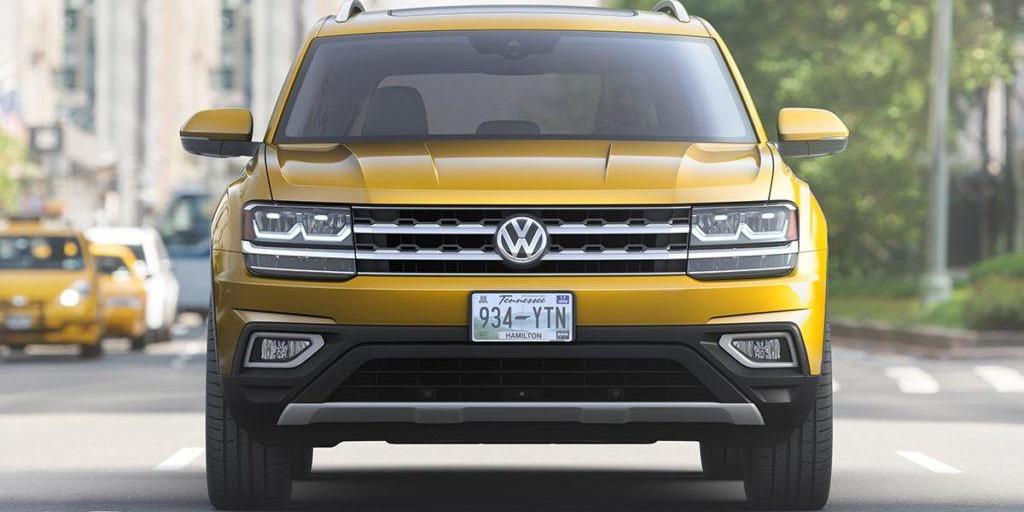