Is Tesla’s Model X SUV All It's Cracked Up To Be?

Ever since it was released, people have been incredibly eager to get behind the wheel of the Tesla Model X SUV. Many have raved about the fully electric vehicle.

The Model X certainly stands out. It can fit up to seven adults and has Falcon Wing doors that provide easy access to second and third row seats. The company also says the SUV has the largest all glass panoramic windshield in production, providing an unparalleled view of the stars and sky above. Tesla claims by being the most aerodynamic SUV in production, the Model X is able to achieve up to 289 miles of range with its highest level trim. The range-topping Model X P100D is also able to go from 0 to 60 miles per hour in just 2.9 seconds.

But is the Model X all it’s really cracked up to be? It’s a question many are now asking after it got slammed in a review in Consumer Reports magazine. The magazine is published by the nonprofit Consumers Union, which is dedicated to creating a fairer, safer and healthier marketplace. While Consumer Reports gave Tesla’s electric sedan, the Model S, a glowing review in the past, the magazine certainly did not do so when it came to Tesla’s electric SUV. In the review, it calls the Model X more showy than practical.

"In spite of its virtues, the Model X's complexity, compromised functionality, and dismal first-year reliability suggest it's a car for early adopters eager to one-up their peers,” states the January issue of the magazine.

Before we take a further look at the criticisms published in Consumer Reports, we should first note that the Model X received an outstanding Owner Satisfaction score according to Consumer Reports surveys. It also received positive reviews from other publications.

Tesla says the Model X’s Falcon Wing doors come in handy in tight parking spaces. With only a foot of clearance on either side, they’re able to smoothly open up and out of the way. The company says the side and overhead opening is so large that parents can buckle their children into the vehicle without having to strain or duck their heads.

While Consumer Reports agrees the doors give easy access to rear seats, the magazine’s editors say they take their sweet time to open and close. Editors described the doors as fussy, saying they are prone to stopping and pausing when they open and close.

“Cool factor aside, actually living with these doors on a daily basis is a huge hassle,” writes the magazine. 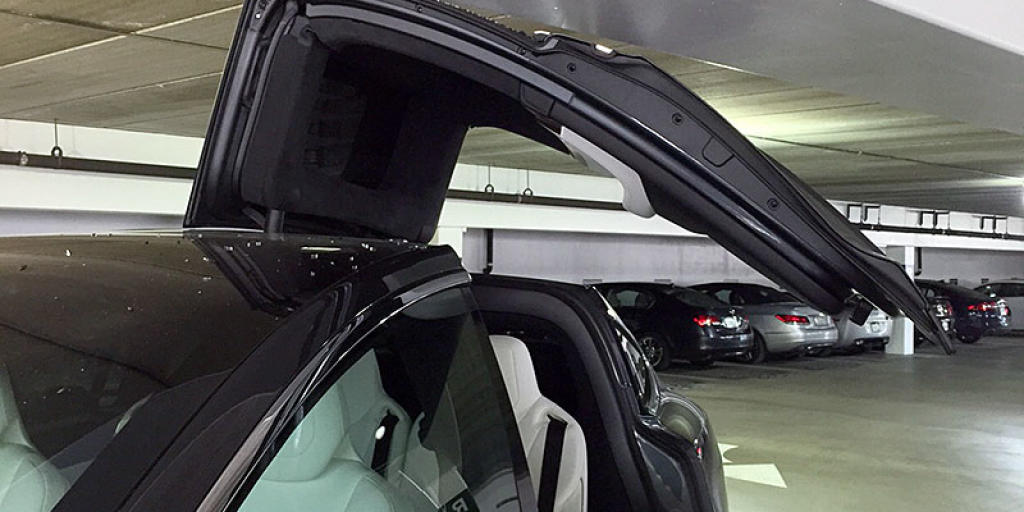 While Consumer Reports editors believe the large windshield is neat, they say it’s not tinted enough to offset the brightness of a sunny day. The magazine also says wind noise is excessive.

Another area the magazine was disappointed with is the Model X’s cargo space. The sports utility vehicle can be configured to fit five, six or seven passengers comfortably. When there is a third row in six and seven-passenger configurations, it can be folded down for added cargo space. The second row seats, however, only lean forward and out of the way. Consumer Reports editors slammed the Model X for that, saying it compromises utility and is unlike every other SUV.

Besides the magazine’s issue with the Model X’s cargo space, it also wasn’t particularly keen on other aspects of the interior. While the magazine’s editors described the front seats as roomy and plush, they say the third-row seats are better suited to kids.

Consumer Reports also had an issue with the main touchscreen, which Tesla says received the most significant over-the-air redesign since the launch of the Model S in 2012. The screen is certainly enough to make technology junkies drool as it’s massive. It’s a central part of the interior’s minimalist design but Consumer Reports editors say you need to take your eyes off the road to use it, making it unsafe.

While Consumer Reports ranked the Model X 15th out of 16 midsize luxury SUVs, it did have some high points. Editors specially reviewed the mid-level trim Model X 90D. Consumer Reports was impressed with the fact that despite its 5,400-pound weight, the all-wheel-drive Model X 90D has warp-speed thrust, reaching 60 miles per hour in just 4.9 seconds. Editors were also impressed with the long range. They say the 90 kWh battery on the 90D provided about 230 miles of range. Tesla’s website states the 90D gets up to 257 miles.

“Like the S, the Model X is very quick and handles well. Ride comfort and noise isolation aren’t as good as in the S, however,” writes Consumer Reports. “Its ride is too firm and choppy for a $110,000 car.”

Consumer Reports is also not completely sold on the semi-autonomous driving package that the vehicle can be outfitted with. The magazine believes automakers should take stronger steps to ensure that vehicles with such systems are designed, deployed and marketed safely. It warns drivers to keep their hands on the wheel. Tesla, however, maintains the hardware provides a safety level substantially greater than that of a human driver.

A Tesla spokeswoman defended the Model X in a statement published by CNN Money.

“Most Model X reliability reports are out of date since we have achieved a 92% reduction in reliability concerns in the past year. We know that Model X owners love their cars -- so much so that 92% say they would buy Model X again,” said the spokeswoman.

While Consumer Reports is quite obviously less of a fan of the Model X than the Model S, other publications disagree. Top Gear, for example, took the electric SUV for a drive in the UK and called it one of the best there is when it comes to size and weight.

It’s also important to again note that Model X received an outstanding Owner Satisfaction score according to Consumer Reports surveys. Like the Tesla spokeswoman said, people who own the Model X love it and that may just be the most important thing of all.