INFINITI’s QX50 concept made its global debut at the North American International Auto Show in Detroit. It’s a follow up to the QX Sport Inspiration concept, which impressed many when it first debuted at the 2016 Beijing Auto Show. The company’s latest concept represents an evolution of the QX Sport Inspiration, “with an original yet practical new crossover form.” “With the unveiling of the QX Sport Inspiration at the 2016 Beijing Auto Show, we showed the future of INFINITI QX models. The new QX50 Concept evolves this concept further and shows how INFINITI could develop its future presence in what is the fastest-growing vehicle segment globally,” said Roland Krueger, president of INFINITI. INFINITI says the concept showcases its vision for a next-generation mid-size premium crossover. But it doesn’t just preview the design of the next QX50, it also illustrates a potential application for INFINITI’s new production-ready VC-Turbo engine.

INFINITI says the QX50 concept represents the latest interpretation of the company’s ‘Powerful Elegance’ design. Its exterior combines taut and muscular lines with flowing, heavily profiled surfaces. A sharp, character line runs from the hood along the length of the concept’s shoulders, giving it a commanding presence and extending the vehicle’s visual length. A wide, muscular stance, meanwhile, “accentuates its versatile capability.” In the front, INFINITI’s signature double-arch grille stands out, adding a sense of presence to the vehicle. While in the rear, the leading edge of the crescent-cut D-pillar is higher than on any current INFINITI production car. The company says it further extends the visual length of the roofline. From the side, INFINITI says the hood is shaped like the rise of a snake’s head. The company says the lines used in the design disguise the relatively short length of the hood and there’s a specific reason for that. INFINITI says it shows how the appearance of a production car could be adapted for a more compact engine, such as its VC-Turbo. Overall, INFINITI says its new concept’s design is more practical than the QX Sport Inspiration. Its ‘cabin-forward’ silhouette and slightly more vertical rear hatch, for example, make for a more versatile and accommodating interior. The new shape of the crescent-cut D-pillar that we mentioned also improves over-the-shoulder visibility for the driver. 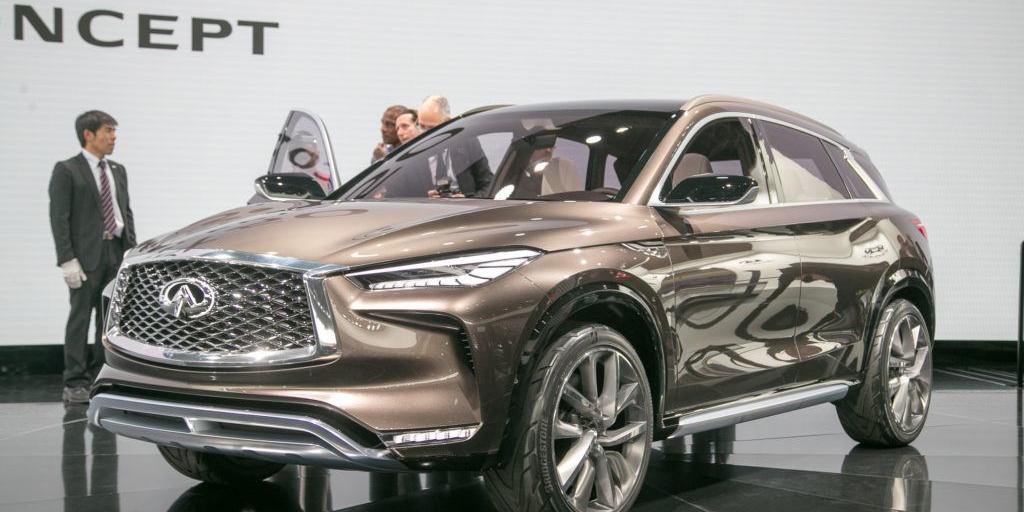 INFINITI says the QX50’s interior demonstrates a new direction of thinking. It features premium materials and craftsmanship. It’s described as driver-centric, yet passenger-minded. The company used two Japanese approaches to craft its interior and give it a handmade feel. As a result, materials were carefully selected and include open-pore ash wood, different types of leather and close twin stitching. “The combination of materials and the way in which they have been applied has allowed INFINITI designers to demonstrate some of the highest levels of craftsmanship ever seen in a crossover in this segment,” writes the company in a press release. INFINITI has even applied for a patent for a new ‘dot quilting’ method it used for the leather that lines the doors and seats of the concept vehicle. The method was inspired by classic buttoned leather sofas. When it comes to the layout of the vehicle, it’s divided into distinct zones for the driver and passengers. It draws from the QX Sport Inspiration’s interior design in that its dashboard is focused on the driver. It differs from the QX Sport, however, in the amount of space it offers passengers. Because the base of the A-pillar has been moved further forward in the QX50 and the hood is also shorter to accommodate the more compact VC-Turbo engine, the concept has a longer, more spacious passenger compartment. It also offers more cargo room than its forbear. For example, INFINITI says the cargo bay is long enough to store a stroller. Of course, we can’t ignore technology. INFINITI says the concept’s Graphic User Interface shows how new technologies could be incorporated into the cabins of future production vehicles. For example, the dashboard’s wide touchscreen could display navigation, infotainment features, the status of the vehicle’s driver assist technologies and information about how the VC-Turbo engine is adapting according to driving conditions. 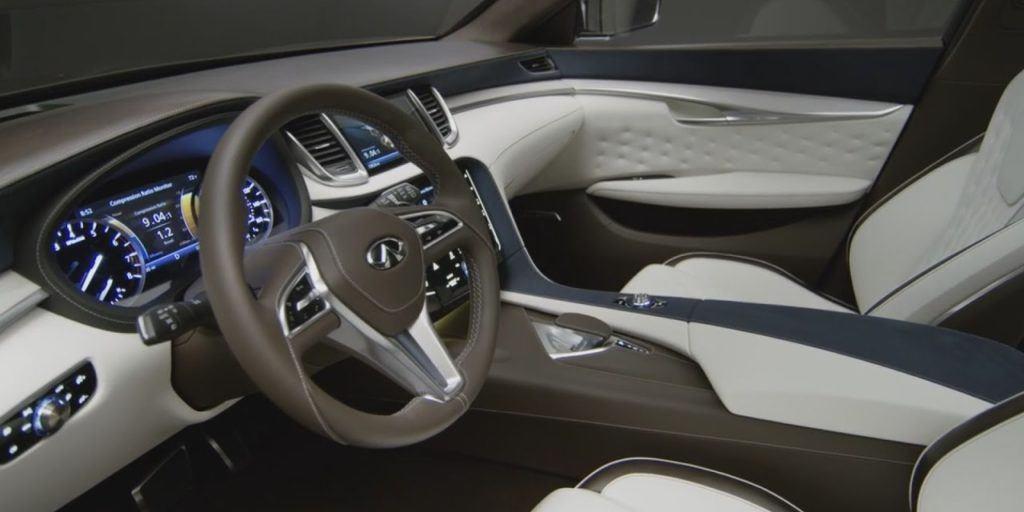 The QX50 concept demonstrates a potential application for the 2.0-liter VC-Turbo engine that was revealed by INFINITI in 2016. As we mentioned before, the vehicle was designed with the compact engine in mind as it has a shorter hood, resulting in more passenger room. INFINITI says the engine represents a compelling alternative to diesel powertrains. “The VC-Turbo engine is able to adapt its compression ratio according to driving conditions to deliver optimal levels of performance and efficiency,” writes the company. “It challenges the notion that hybrid technology and diesel are the only powertrains capable of offering high efficiency and torque.” INFINITI says the engine churns out an impressive amount of power, higher than many competing four-cylinder turbocharged gasoline engines. The company says its performance is even close to some V6 gasoline powertrains. When it comes to fuel efficiency, though, INFINITI says the VC-Turbo comes out on top over V6 gasoline engines of similar power output. The company says the engine will make its production debut in 2018. We’re not sure, however, if that debut will be made in the redesigned QX50 as Infiniti did not state when the concept vehicle will reach the market. 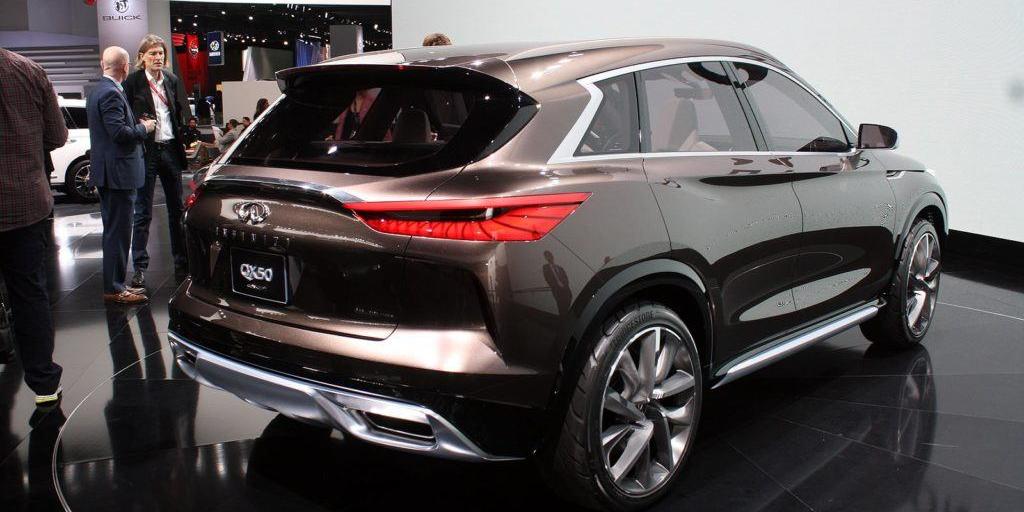 INFINITI says the concept’s driver assist system is part of the company’s development of autonomous driving support technologies. While the technologies included in the concept were not specifically listed by INFINITI, the company says they help the driver identify and respond to other vehicles on the road as well as potential hazards. The company says future technologies, meanwhile, will draw on inputs from a network of laser scanners, radar and cameras to keep the vehicle’s occupants safe.

The QX50 concept only builds on the excitement initiated by the QX Sport Inspiration. It’s exciting to see how its design was adapted to fit the VC-Turbo engine. That design also resulted in some improvements for the QX50 over the previous concept including more passenger room. We’re just curious to know when the production version of the vehicle will hit the market. But as we mentioned before, INFINITI says the VC-Turbo will make its production debut in 2018. Could that mean it will first arrive in the redesigned QX50? For now, it’s a waiting game. 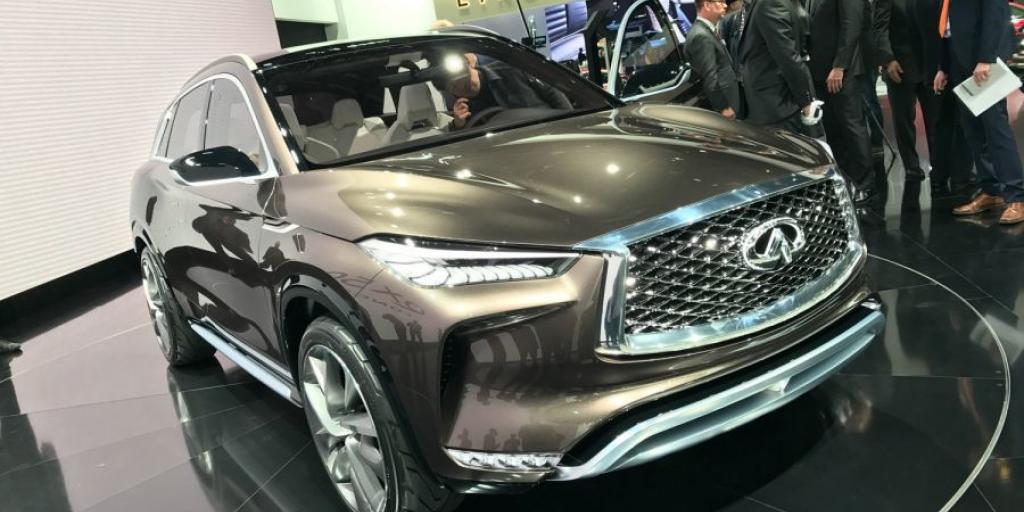