It’s a futuristic sports utility vehicle with doors that open as the driver approaches. It’s able to race from 0 to 60 miles per hour in under 2.5 seconds. It’s the FF 91. Faraday Future unveiled the SUV ahead of the 2017 Consumer Electronics Show in Las Vegas. It’s the American start-up company’s first vehicle slated for production. The company is now accepting fully refundable reservations of $5,000 for the vehicle. Faraday Future says the first 300 orders will have the option to upgrade their reservation in March to join an exclusive launch series known as the Alliance Edition. The unveiling was considered by many as a major step forward for the China-backed company. That’s because last year, it raised eyebrows with the unveiling of its first concept vehicle at CES. That’s because FF had no plans to produce it. It caused some to question the company’s credibility. Recently, funding challenges for FF have also come into the spotlight. Various reports have detailed cash shortages for FF and several executives also departed the start-up before the big CES reveal. It’s just part of the reason why FF truly wanted to hit a home run with the unveiling of its electric SUV.

Let’s start by taking a look at the FF 91’s performance. The vehicle is built on the company’s Variable Platform Architecture or VPA. “FF’s proprietary VPA is a flexible powertrain system featuring a monocoque vehicle structure in which the chassis and body are a single form – providing measurable improvements in overall vehicle rigidity, safety and handling,” writes the company. The company says an available all-wheel drive system offers greater traction, control and power distribution. The VPA also houses the SUV’s battery technology, multiple motor and battery configurations and the FF Echelon Inverter, the company’s first patent. Now here is where things get exciting. The FF 91’s powertrain features a multi-motor setup that offers 1,050 horsepower. All that power means it’s able to go from 0 to 60 mph in just 2.39 seconds. FF didn’t, however, sacrifice range for performance. Outfitted with a 130 kWh battery, the SUV has a range of 378 miles. The company also says charging the vehicle is a breeze. FF says it has the fastest charge speed currently available, with the ability to charge at more than 500 mph. The home charger, meanwhile, achieves 50 percent to full charge in under 4.5 hours at 240V. 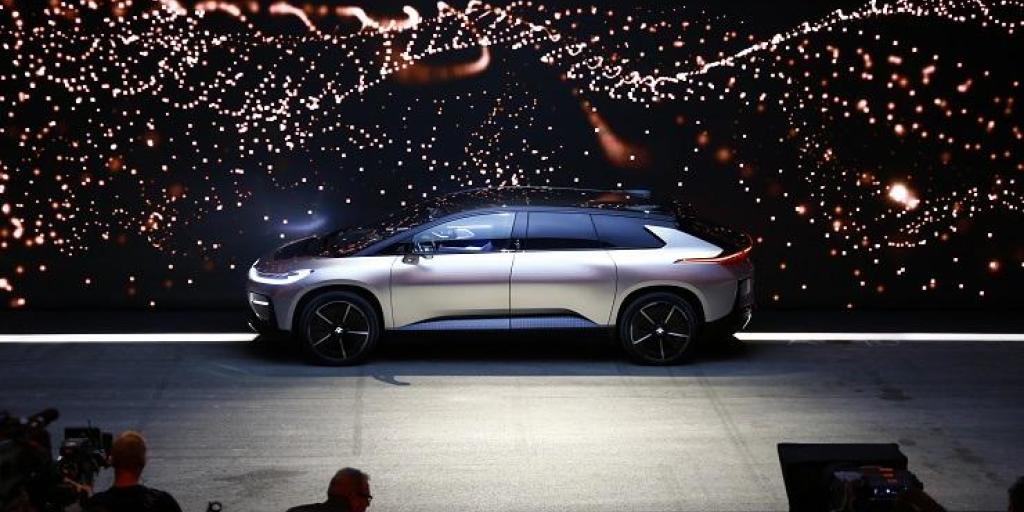 The FF 91 certainly stands out. It breaks from the mold with its long, low look. The company says its design philosophy is driven by aerodynamics. “The sleek, rounded front fascia and edgy, angular rear create a striking form that improves aerodynamic efficiency to increase range,” writes the company. “The signature UFO line that runs around the mid-section of the vehicle provides FF 91 with a unique but simple, stabilizing design element.” As we mentioned earlier, each door can open automatically and independently. The feature is said to allow for quick and easy passenger pick up. There’s also no need to worry about whether or not you’re parked too close to another vehicle because there are sensors to prevent the doors from opening too wide. The vehicle also welcomes you through its lighting systems. When a driver approaches the FF 91, the vehicle’s rocker panel illuminates with an owner confirmation sequence that brightens based on how close you are to it. The company also says the lighting system will improve safety by informing pedestrians and others when the vehicle is driving autonomously. 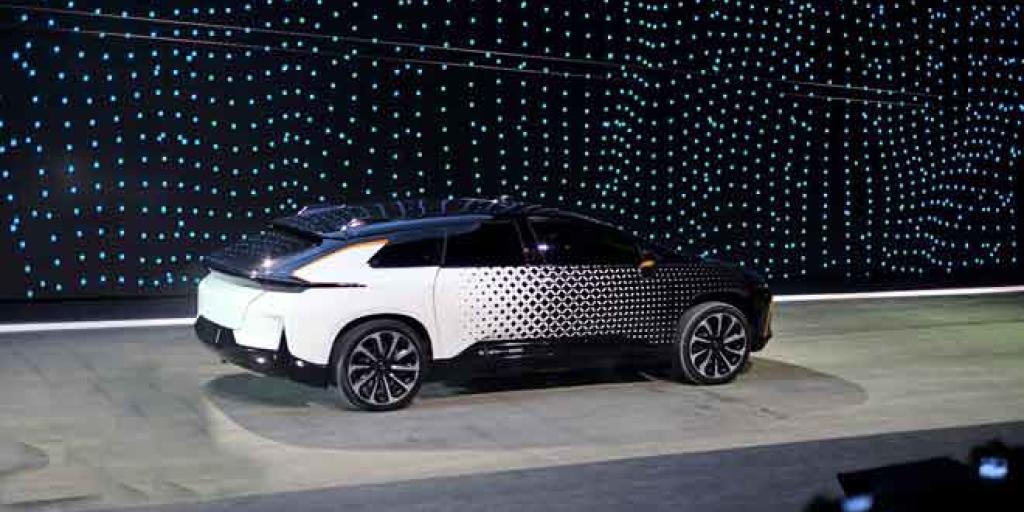 The company says the FF 91's wide stance and long wheelbase deliver a spacious interior. It's designed to keep passengers feeling relaxed and energized even after being stuck in traffic for hours. "The rear seats deliver industry-leading rear-seat reclining angles, putting passengers in the biomechanically and ergonomically optimal position for comfort," writes the company. FF says the rear seating experience provides lower leg, lumbar and upper back adjustments and support. The seats even offer massage, heating and ventilation for cooling. Another neat part about the interior is the Polymer Dispersed Liquid Crystal glass which the roof, rear and side windows all feature. It's operated by users tapping on the glass, providing instant privacy and shade from the bright sun outside. When it comes to technology, the vehicle offers in-car connectivity through FF EcoSystem. The company says the system gives users access to their apps and content all while learning their preferences. FF partnered with LeEco, a global internet company, on the system. FF is also introducing some futuristic technology that allows for facial recognition. It's called Arrival Interface and it allows drivers and passengers to unlock the car without a key. It's all possible because of a camera installed in the B-pillar. Interior cameras also use the technology to recognize users and automatically adjust settings to their preferences. It's not just able to recognize faces but also facial expressions, adjusting settings like music, temperature and massage based on a passenger's mood. 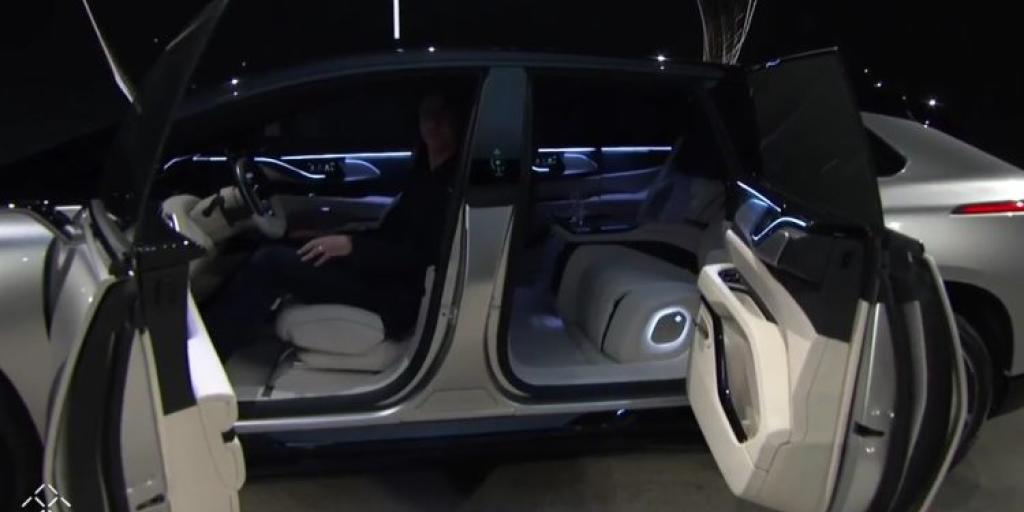 FF says the FF 91 will be the first production vehicle to feature retractable 3D lidar. It's part of a complex sensor system including 10 cameras, 13 long and short range radars and 12 ultrasonic sensors. "FF 91 possesses significantly more sensors compared to other vehicles, and industry-leading computing power to quickly extract data from all those sensors and correct driving decisions," writes the company. Instead of a standard rearview mirror, there's a high definition display that merges the live feed from the rearview camera and the side mirrors into a single image. FF says it virtually eliminates blind spots. Combined with the views from the exterior mirror cameras, FF says the system improves safety by offering a wider exterior field of vision. Another detail to note is that the vehicle is able to park itself after the driver has exited. It's able to park in private lots and roads. Drivers can also summon the vehicle from its parking spot.

Production of FF 91 is planned to start in 2018. People will certainly be watching the start-up to see if they hold true to that promise. While the SUV is definitely impressive, FF has had its fair share of hiccups. Every company has growing pains, however, so it may be best to hold off on any doubts, at least for now.