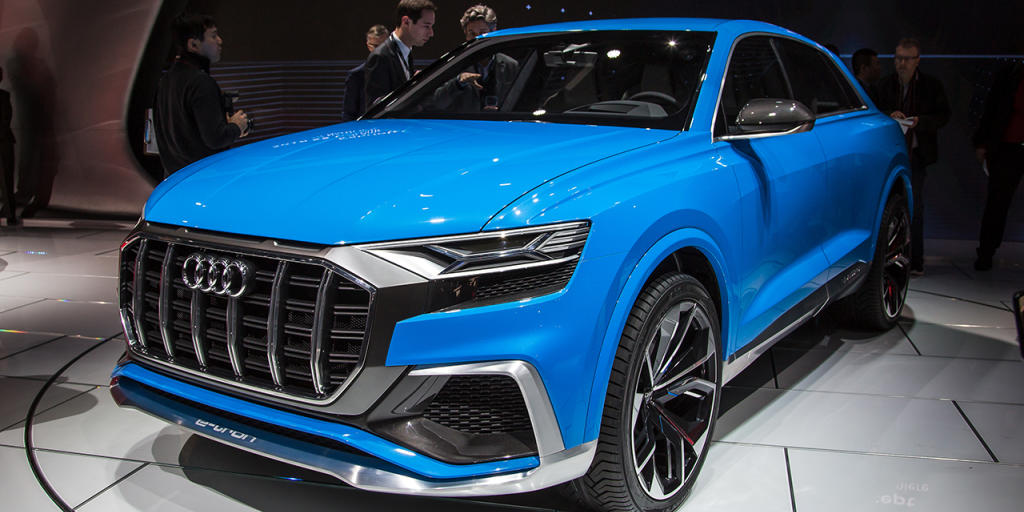 Audi has released an all-new SUV and it comes at a time when the world’s appetite for sports utility vehicles is stronger than ever! Audi now considers its all-new Q8 as the brand’s top premium SUV. That means a lot of thought went into it!

Audi’s all-new Q8 was designed to have a coupe feel, and is wider and lower than the Q7. The vehicle was unveiled to the world at the Audi Brand Summit in Shenzhen, China on June 5.

“The five-passenger SUV offers advanced connectivity, infotainment and driver assistance systems, combined with capable driving dynamics, to set a new standard as the top SUV model from the Audi brand,” writes Audi in a press release on its website. 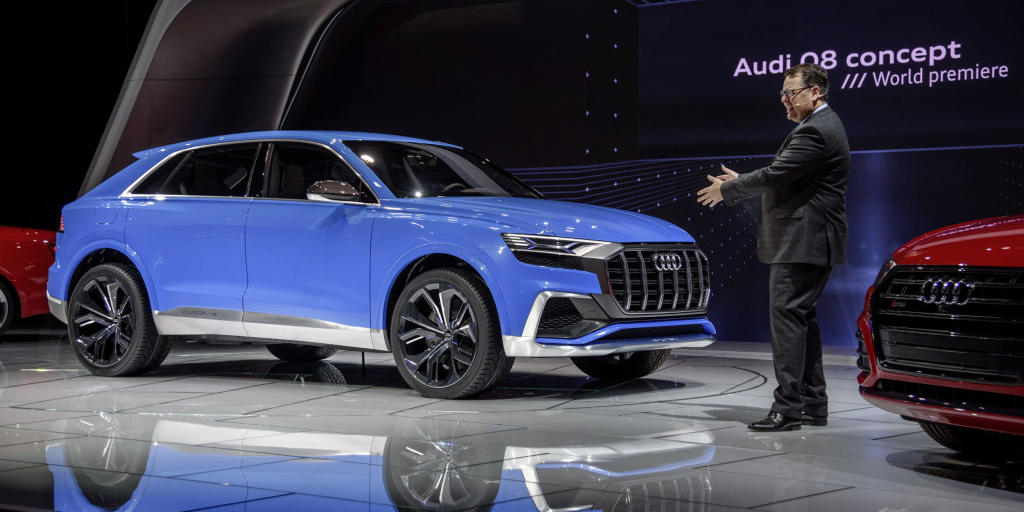 The all-new Q8 combines the aesthetics of a coupe with the functionality and sportiness of an SUV. It also introduces an entirely new SUV design language for Audi and is proof of what’s to come from the brand!

What immediately catches your eye when looking at the all-new Q8 is the new grille design. The Singleframe grille has an octagonal shape and, combined with the large, sporty air inlets, emphasizes the vehicle’s commanding presence. The vehicle’s pronounced wheel arches and large wheels are also something to write home about! Features like that are meant to pay homage to the vehicle’s quattro DNA. One Audi designer referred to the wheels as being the largest ever for Audi!

While those features certainly give the all-new Audi Q8 SUV a commanding presence, the coupe-like roofline makes the vehicle also feel sexy and sleek. But, no need to worry about headroom! The Audi Q8’s designers say there’s plenty of it!

Finally, when you view the SUV from the rear, you’ll notice a black panel beam that extends the width of it. It gives the vehicle a sharp look. It’s also located beneath a light strip that connects the taillights. 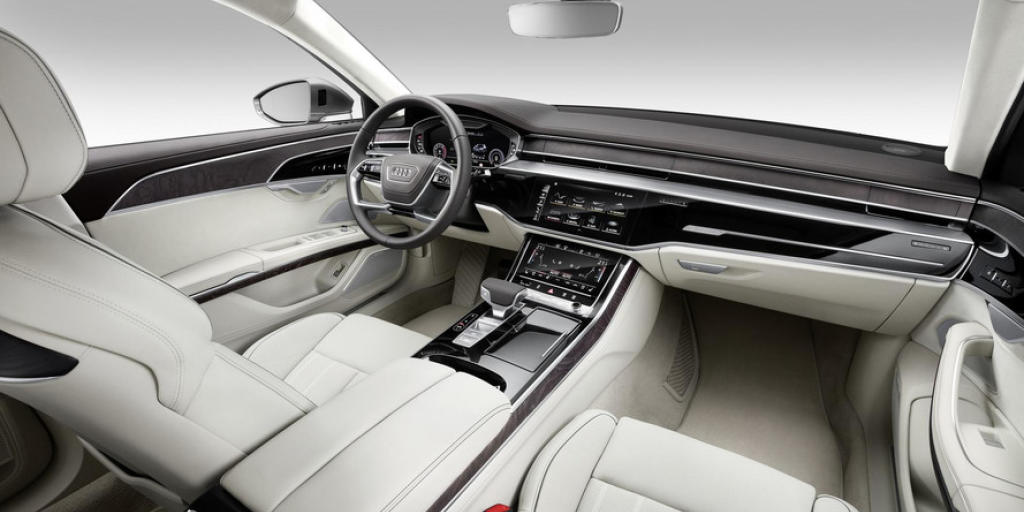 Audi describes the interior of its all-new Q8 as elegant. The brand says the design is a complement from the exterior. The vehicle offers room for five passengers and those passengers will be riding comfortably! That’s because the interior is spacious. There’s also plenty of cargo space for luggage and other items.

Audi says the central element of the Q8’s interior is the all-new MMI touch response display.

“With its black-panel look, it dissolves into a large, black inlay when switched off, creating a serene interior environment,” writes Audi. “All elements relate logically to one another, from the flat air vent strip to the wide center console leading to the tiptronic selector.”

In the dark, you’ll notice another attractive element. The optional contour light traces the sleek design lines of the interior and provides backlight for the three-dimensionally lasered quattro badge located above the glove compartment.

Although not listed in the press release, the vehicle’s pictured gray interior is also charming. The quilted seats give the interior added style and also appear to be quite comfortable!

Those behind the interior say they designed it like a diamond, meaning every aspect of it had to be polished. Those designers say they’re proud of the product, despite not fully thinking it was even possible at times! They also say they hope to continue to perfect the new SUV design language that the Q8 is ushering in for Audi. 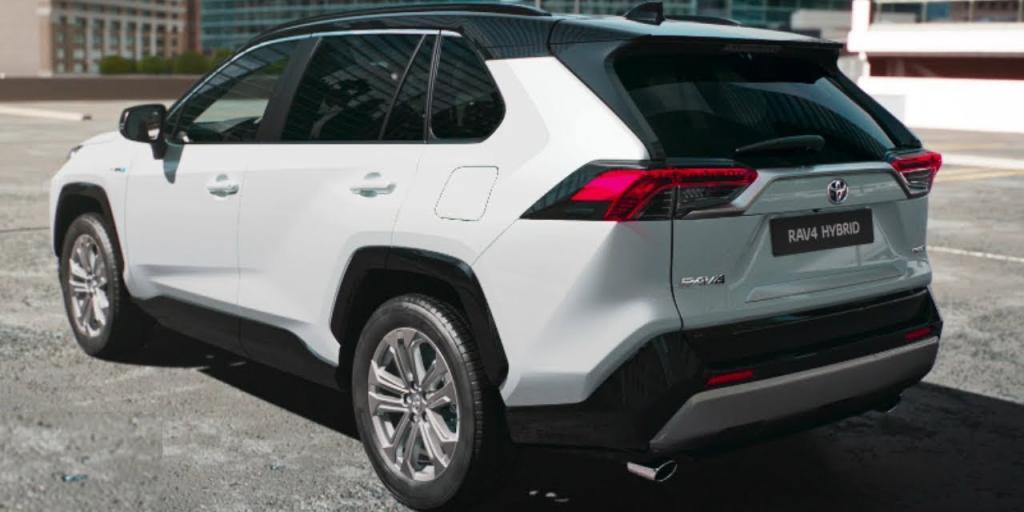 It’s time to dig deeper into the new MMI operating system of this Q8. Audi says it features haptic and acoustic feedback. The brand also says it’s as intuitive as a smartphone. What’s interesting is that when a user’s finger triggers a function, they’ll hear and feel a click. That way, you know the vehicle is doing what you want it to! The system also has a logical and flat menu structure, which translates to fast access to various vehicle functions. Because who has time to wait, right? And if it’s not exactly to your liking, no worries! The system can be personalized using configurable and movable “favorites” buttons. But, if you’re feeling lazy, you can always just speak requests to the system. Drivers, for example, can say “I’m hungry” to which the all-new Q8 will suggest nearby restaurants. In that way, it serves as an intelligent travel assistant! Talk about convenient!

We can’t mention technology without mentioning the SUV’s audio system. There’s a Bang & Olufsen 3D Advanced Sound System to help you listen to all your favorite artists. Sound and connection quality are also great in the Q8 thanks to the Audi phone box, which enables wireless charging for compatible smartphone devices.

“The purely mechanical center differential transfers power to the front and rear axle at a standard ratio of 40:60, and when required, can transfer the majority of the power to the axle with better traction,” writes Audi in a press release.

It also comes standard with an adaptive damping suspension. Then, there’s available adaptive air suspension which enables the various suspension and damping combinations that make up the Audi drive select modes. Audi says the system makes its Q8 a capable choice for off-roading. Although, we have to admit, an Audi SUV wouldn’t necessarily be our first choice for an off-roading adventure.

One of the Audi Q8 SUV’s designers summed up the new vehicle by describing it as “the top of the Q.” That means a lot is riding on this SUV! You can tell executives wanted to push out an impressive product, one that represents a shift in the Audi SUV design language.

We’re excited by what we see and can’t wait until the Q8 arrives! The all-new vehicle from Audi will launch in the United States in the final quarter of 2018. So, you won’t have to wait too much longer to get your hands on one! Pricing estimates have not yet been released for the Q8. However, the Audi Q7 SUV starts out at $49,900. So, you can likely expect the Q8 to be more expensive.