He’s one of those larger than life public figures. At the age of 20, Arnold Schwarzenegger won the Mr. Universe title. He then went on to win the Mr. Olympia contest seven times. But he’s not only seen as one of the greatest bodybuilders of all time. He’s also viewed as an excellent actor. He helped make “The Terminator” a massive box office success. Of course, we can’t forget his role in politics either. Schwarzenegger served two terms as governor of California. He’s also now the host of “The Celebrity Apprentice,” a role he took over from none other than President Donald Trump. He’s a big name celebrity that’s followed wherever he goes and because of that, a lot more people are about to become familiar with the Austrian company Kreisel Electric. That’s because the company recently took a Mercedes G-Class 350d, simply known by many as the G-Wagen, and ripped out its engine and transmission for Schwarzenegger. The G350d model was completely converted to electric power making it both gigantic and green.

The vehicle was unveiled to Schwarzenegger in Austria at the Hahnenkamm ski race in Kitzbuehel. For those who don’t know, Schwarzenegger is from the Central European country. So it makes complete sense that the vehicle was unveiled to him there. In a video of the unveiling posted online by Kreisel Electric, Schwarzenegger is shown taking a video of the vehicle on his iPhone. While recording he says, “This is not a regular car because, this one, instead of having a gasoline engine, it’s an electric engine. Zero pollution! Look at this!” Someone then opens the hood of the vehicle to show that the engine has been taken out. Schwarzenegger continues to record as he says, “It’s all electric and [gets] 500 some horsepower, can you imagine it? This is the new deal!” The video then shows the celebrity getting into the vehicle and driving off while smoking a cigar (to the amusement of people watching).

The company, which specializes in electric powertrains, said it wanted to make the vehicle for Schwarzenegger because it knows he deeply cares about the environment. In 2015, for example, Schwarzenegger took to Facebook to address climate change deniers. In that post, he outlined a hypothetical scenario. He said behind one door, was a garage with a gasoline car and behind the second, was a garage with an electric car. He asked users what door they would choose to open if they knew they had to stay in one of the garages with the door closed for an hour. He wrote, “I'm guessing you chose the Door Number Two, with the electric car, right? Door number one is a fatal choice - who would ever want to breathe those fumes? This is the choice the world is making right now.” He then asked users on the site to join him in choosing to drive electric vehicles. Clearly, it’s an issue he feels passionate about.

At the vehicle unveiling on Jan. 23, 2017, it was revealed that the former governor would be taking the electrified G-Wagen back to the United States with him to drive around the streets of Los Angeles.

“The initial test drive was a real pleasure,” said Schwarzenegger. “The Kreisel is incredibly sporty and perfectly benefits from the advantages e-mobility has to offer.” 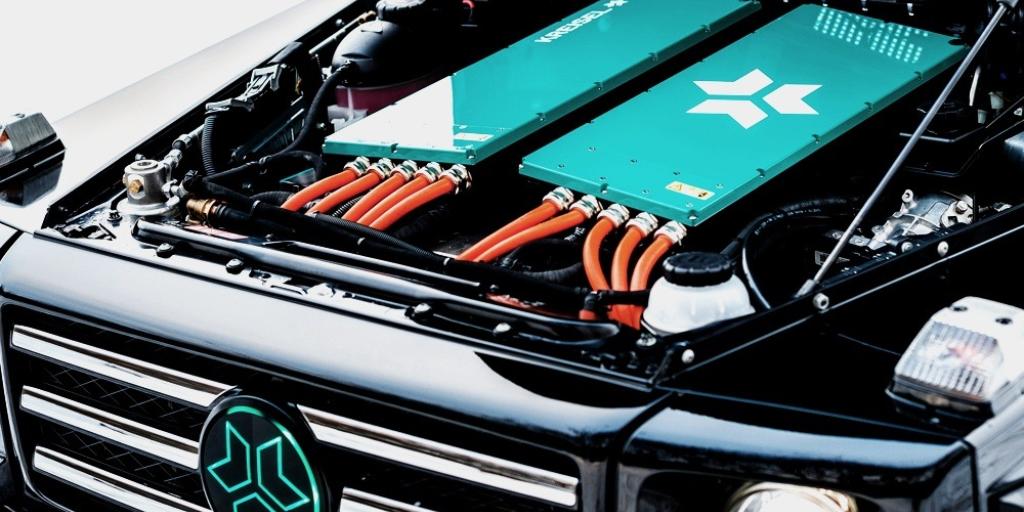 What makes the vehicle so great is that it’s not only environmentally friendly but also powerful. Two electric motors help it churn out about 482 horsepower. Despite weighing well over 5,000 pounds, the electrified Mercedes-Benz G350d is able to go from 0 to 60 miles per hour within 5.6 seconds. Kreisel says that makes the electric version of the vehicle three seconds faster than the original diesel with its V6 engine. It’s able to reach a top speed of about 114 miles per hour. The adapated G-Class features 80 kWh of total battery capacity. Battery modules are located under the hood and in the rear.

“The Kreisel battery is distributed within the car in segments: under the bonnet, in the rear, where it replaces the fuel tank and underneath the entry,” said Christian Schlogl, a member of the Kresiel Electric management team.

The company says the vehicle is able to maintain its off-road capability and gradeability that way. It also says as a result, all comfort functions remain accessible.

Kriesel Electric estimates a 190-mile range for the vehicle. It also says the new battery technology allows for extremely fast charging with up to 150kW. The battery system can be fast-charged up to 80 percent of its full capacity in just 25 minutes. 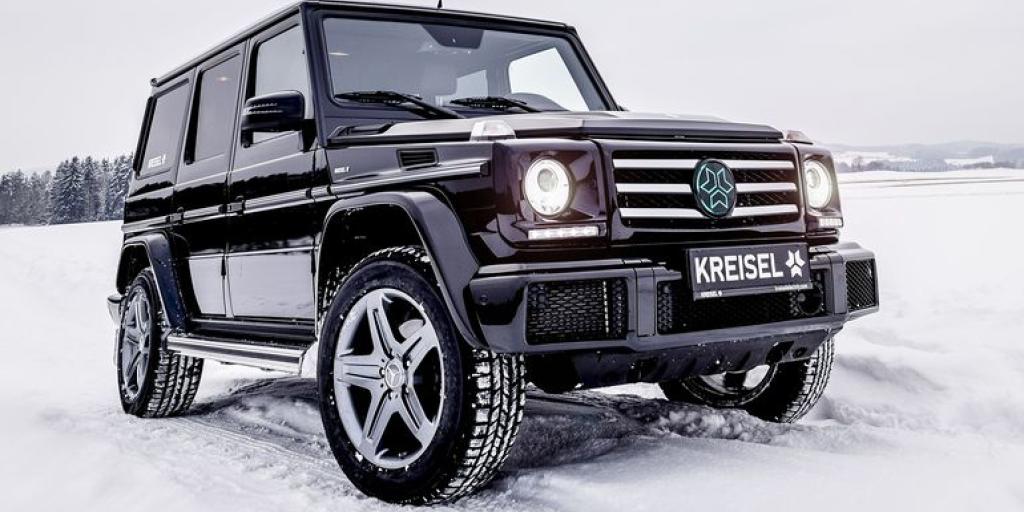 Kreisel Electric says it will continue to develop the vehicle further with the help of Schwarzenegger who will drive the prototype in Los Angeles. The former governor has long had a love for the G-Wagen. He has reportedly driven one for decades. So to say Schwarzenegger is excited about being involved in the process would be a bit of an understatement.

“This amazing off-road vehicle as a clean and fast electric car?” A dream has come true,” said Schwarzenegger.

While this vehicle may be the former governor’s baby for now, it’s important to note that he’s no stranger to driving adapted vehicles. While he was in office, for example, he drove a hydrogen-fueled Hummer H2 around sunny Los Angeles. It was called the Hummer H2H. General Motors partnered with Schwarzenegger’s office on the project. Schwarzenegger said it was built to help California demonstrate the economic and technical viability of hydrogen. He also reportedly had Hummers than ran on vegetable oil and biodiesel.

While the vehicle is not for sale, Kreisel creates prototypes like it to show the world what the company is capable of.

“To demonstrate what is possible you best make it reality,” writes the company on its website. “That’s why we create fully functional and licensed prototypes what is possible in the area of electrical cars.”

For sale or not, it’s pretty awesome knowing this vehicle is making its way around Los Angeles and is being driven by none other than “The Terminator.” 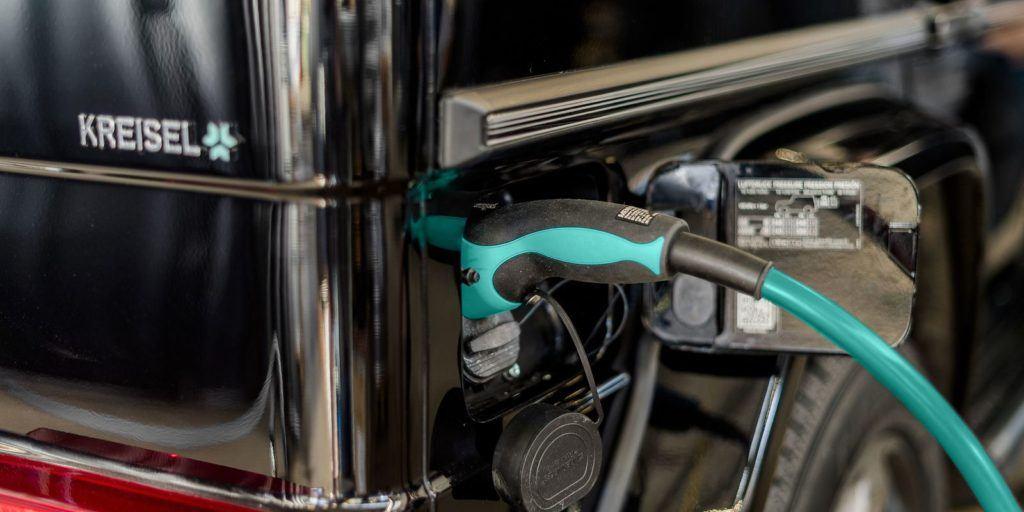