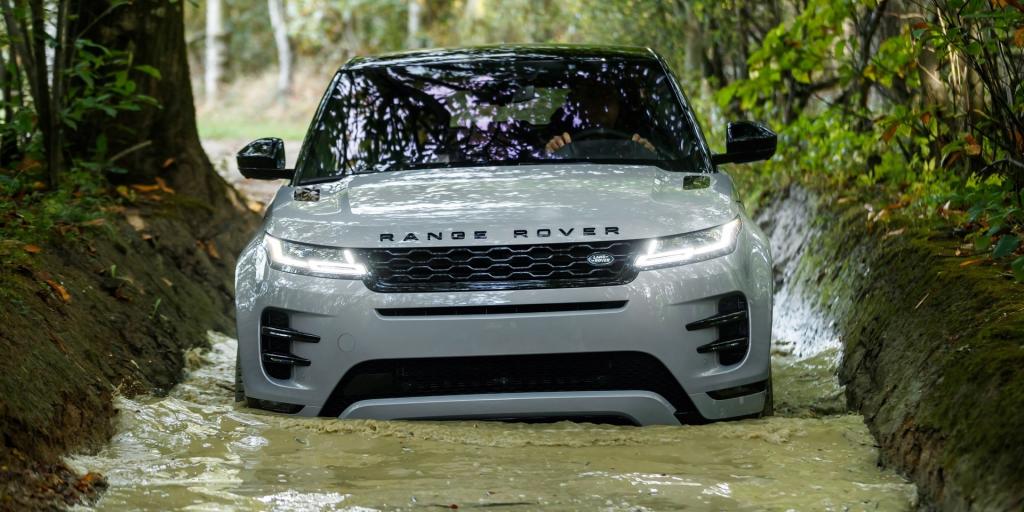 The 2020 Range Rover Evoque will make its official debut in the United States in February at the Chicago Auto Show, but it has already been revealed overseas. The compact luxury SUV has had a complete refresh for 2020. There’s more space in the vehicle thanks to its new architecture, which was developed to support electrification. The 2020 Evoque also gets a refreshed exterior and interior, more smart technology, and multiple cameras that contribute to a unique luxury experience.

“When the Range Rover Evoque made its debut back in 2010, it transformed the world of compact SUVs; the new model is set to continue that remarkable journey,” said Gerry McGovern, chief design officer of Land Rover. “This characterful vehicle combines refinement and fun to create that all important emotional reaction that will turn heads and make people smile.”

While you’re able to instantly tell that the 2020 Evoque is still an Evoque, the design is cleaner and the new slim LED headlamps provide a more sophisticated look. Flush door handles also help give this new Evoque a smoother appearance. Stretching across the rear of the vehicle is a striking black accent that creates a sense of visual width. Powerful wheelarches, alongside optional 21-inch wheels, combine to create a strong and dynamic attitude.

“Customers love the compact proportions of the Evoque so we have kept the overall dimensions very similar to the original, but we have lengthened the wheelbase to make the Evoque more practical,” said Massimo Frascella, exterior design director for Land Rover. “Our approach has optimized the proportions to elevate the new vehicle’s unique personality. The new Evoque is a true Range Rover, highly sophisticated with a unique and striking presence.” 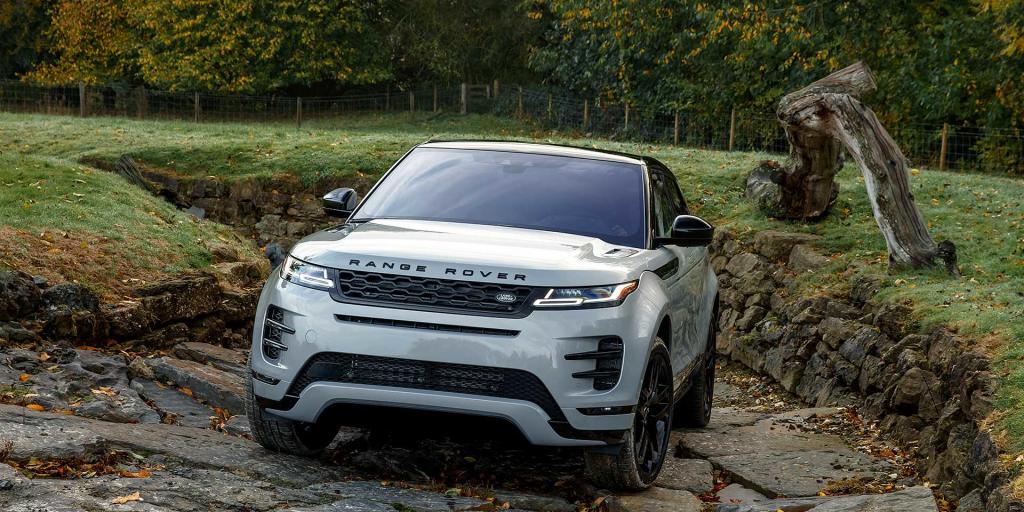 The Evoque’s architecture also had to be new in order to support electrification. With the longer wheelbase, there’s now extra rear knee room and an increase in small item storage in the 2020 Evoque! The luggage space is also six percent larger than that of the previous model, as well as much wider. Continue reading below to learn more about the 48-volt mild-hybrid powertrain that this new architecture was created to accommodate!

Inside the vehicle, there’s a whole new feel! A majority of the buttons that were in the center stack before have been removed in favor of a full touchscreen experience. Above the vehicle control screen is the infotainment system screen, which can actually swivel up from its flush position in the dash! If those two screens weren’t enough for you, know the instrument cluster is also a digital screen. That’s a total of three screens in this SUV!  Plus, there are awesome camera displays which we’ll explain more about below. The vehicle also now has Apple CarPlay and Android Auto compatibility. We should also note two different eco-friendly seat materials are being offered with this 2020 Evoque as replacements for leather. 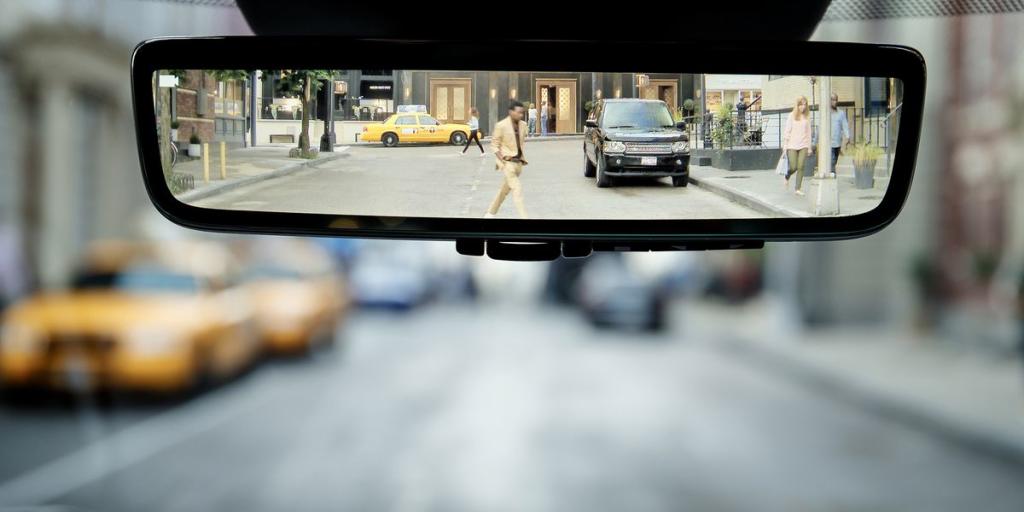 What’s so cool about this new Evoque is the technology you can find in it! Land Rover says it’s the first of its vehicles to feature its “Smart Settings” technology. That technology uses artificial intelligence algorithms to learn the driver’s preferences! That means it learns to automatically control things the way you like it such as your seat, steering column, temperature, music, commonly dialed contacts, and more!

What’s really the highlight of this vehicle, though, is the “ClearSight Rear View Mirror.” it can serve as a normal rear view mirror for you, but with a touch of a button it can also transform! In an instant, it turns into an HD video screen. The screen provides a 50-degree field of vision of what’s behind you. It’s even capable of superior visibility in low light! It’s great the Evoque has this feature because the vehicle’s rear window is so short, that it actually can be difficult to see out of. Not to mention, if you have bulky cargo in the back of the vehicle or your passengers are moving around, your rear view can be blocked. By switching it to the HD video screen mode, you eliminate those obstacles! 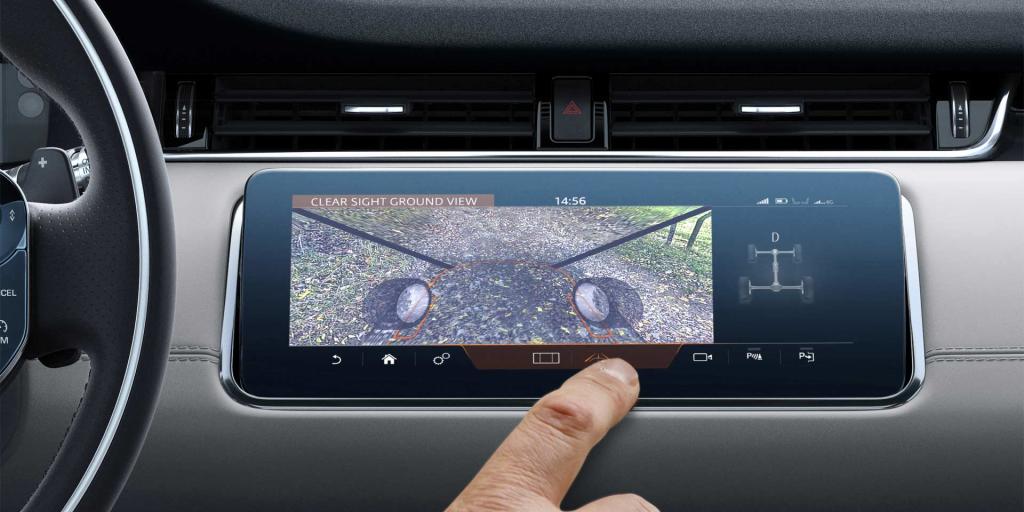 We also have another camera to talk about. The Evoque is the first vehicle to feature this new technology from Land Rover. To help you out while maneuvering the SUV, there’s the “ClearSight Ground View” system. Cameras in the front grille and on the door mirrors project a feed onto the central touchscreen to show what is ahead of and underneath the front of the vehicle with a virtual 180-degree view. It’s designed to help the driver maintain visibility when negotiating extreme terrains as well as high city curbs.

The new Range Rover Evoque will be available from launch with a 48-volt mild-hybrid powertrain. The small battery is paired to an Ingenium turbocharged four-cylinder engine with a combined system output of 296 horsepower. At speeds below 11 miles per hour, the engine is designed to shut off while the driver applies the brakes. When the driver accelerates, the stored energy is then redeployed to assist the engine under acceleration. Land Rover says that makes it a great vehicle for city driving. The engine is paired to a nine-speed automatic transmission from ZF.

In order to make room for the 48-volt battery, Land Rover use new mixed-metal Premium Transverse Architecture for the Evoque. The new architecture makes the vehicle 13 percent stiffer than before.

All-wheel drive is standard for the 2020 Evoque. It will disconnect the rear wheels automatically when they are not needed for better fuel economy. There’s also the standard Terrain Response 2 System that’s designed to automatically detect the surface being driven on and adjust the vehicle’s driving character accordingly. The new Range Rover Evoque is also now capable of wading through water of up to 23.6 inches!

We’re loving the changes made to the 2020 Range Rover Evoque and are happy to see the mild-hybrid powertrain being offered. We’ll have to wait to know the cost until the 2019 Chicago Auto Show. That’s where the Evoque will make its U.S. debut!