Rezvani hasn't been around for too long, they only set up shop in 2014 but that hasn't stopped them from creating some of the best supercars we could imagine. These cars don't just look good, they perform brilliantly as well.

They have the Beast and the Beast Alpha as well as an x version for each of them. Now, this small car manufacturer is going to build SUVs and the first prototype is here. This might not come as much of a surprise but their idea of an SUV is just as crazy as their supercars.

They are calling it the Rezvani Tank. As the name suggests, the SUV is all bravado and brawn thanks to its super buff body and massive wheels. It also has a huge V8 engine which provides it with sufficient power to tackle pretty much any terrain. This is something Michael Bay needs to put in the next Transformers movie – this SUV is no joke. It is a badass, to say the least!

The Tank is also able to live up to its military appearance in many ways. It comes with standard night vision, FLIR thermal imaging, LED off-road lighting, and a heads-up display. If that's not enough, it has ballistic armor available as an optional upgrade.

Yet, below all of this, the Tank is nothing more than a Jeep Wrangler Unlimited. Yes, if you open the front door or the rear doors (which have been re-hinged to open like suicide doors), you will see an interior that looks just like what you would find in a Wrangler. Of course, Rezvani has done a lot in order to upgrade the interior of the Wrangler which makes the 6-figure asking price they have slapped on it much more palatable.

The Tank continues to use what Mopar (a parts distributor under the FCA umbrella) and FCA (Fiat Chrysler Automobiles) has to offer under the hood. The 500hp V8 that's used in this Tank is none other than the 6.4L Hemi which you would find inside the SRT versions of the Jeep Grand Cherokee, Dodge Charger, and Dodge Challenger. Nonetheless, the Tank is a completely original design which is fitted on top of a Jeep Wrangler, one of the most iconic off-road vehicles you will find today! 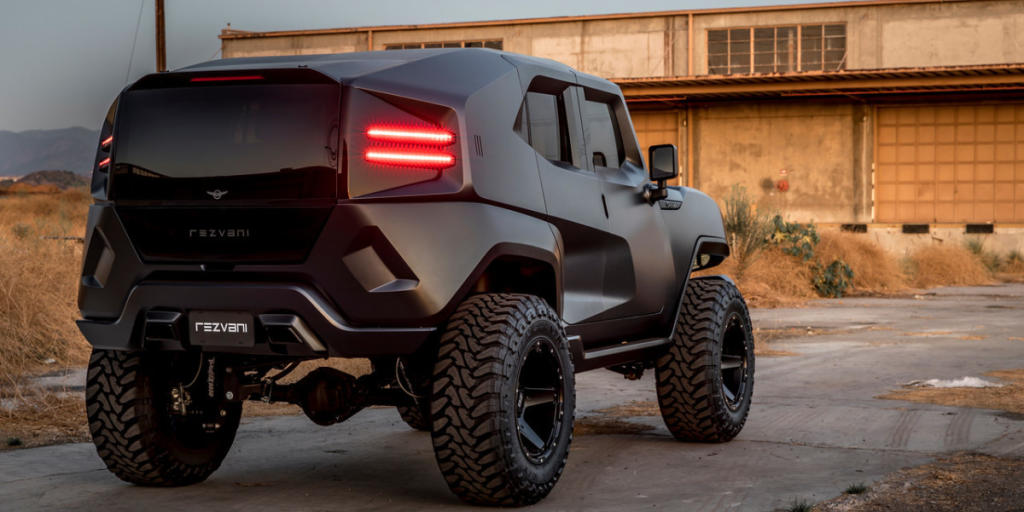 The Tank is unlike anything anyone has ever seen before. All the credit for this masterpiece has got to be given to the design team at Rezvani who have managed to come up with something that is radical yet manages to maintain a very high level of practicality.

On the front, the Tank has a full-width bumper with LED lights to protect all of the important mechanical bits. It has a grille shaped like an x and some narrow headlights sunken right into its bodywork. The muscular fenders do well to make the hood look short as do the bulging doors and large tires.

The windshield is perhaps the only thing from the Wrangler that you'll be able to recognize in the Tank. But, even the profile of the windshield has been changed when you actually look at it. This is because of the integrated LED light bar which has been mounted overhead. The rear is more unique due to its the sloping roofline, LED taillights, scalloped body panels, and glass lift-up tailgate.

The tires the Tank features are Toyo Open Country M/Ts on five-spoke wheels made by Grid. There are a couple of off-road packages on the menu from Rezvani too, if you're an adventurer. 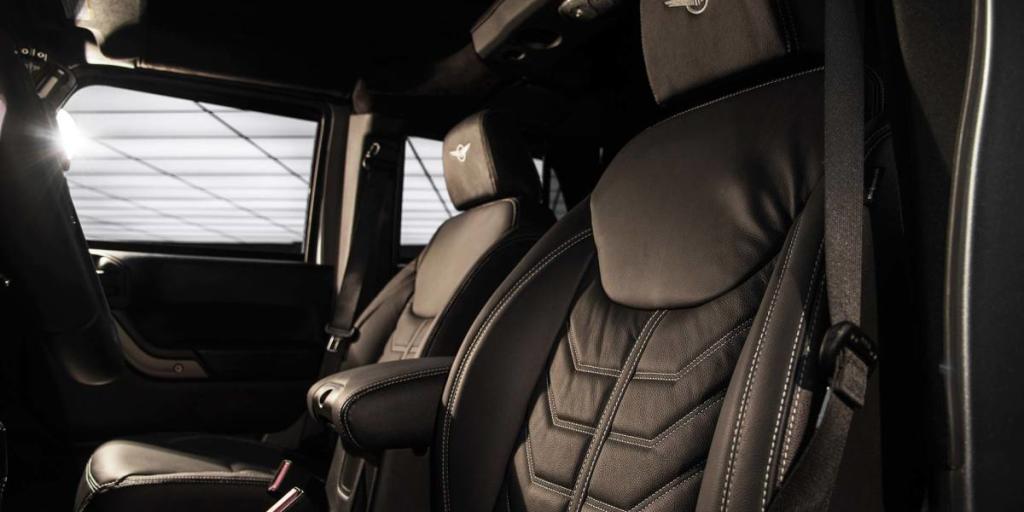 Though the exterior of the Tank is unquestionably unique, the interior is pretty impressive as well. Topping the list, as far as modifications are concerned, are the rear suicide doors. Not only do these doors open on the opposite side as compared to the standard Wrangler, they are mechanical. Some people may like this, some people may like the normal opening and closing of doors. Everyone has their own proclivities.

Once you're inside the Tank, there are some new leather covers for the seats with intricate contrast stitching and the Rezvani logo embroidered on all the headrests. The dashboard comes with an infotainment system that has been upgraded with a bigger screen than those currently being offered in Wranglers.

Moving on to the center console, you will find the regular gated shifter here for the automatic transmission as well as a lever to operate the part-time 4WD. The grab handles are made of anodized aluminum affixed to the A-pillars, which assist in climbing into the cab. Once you are inside, there is enough room for 5 people to be seated, though the middle person sitting in the second row is not going to have too much space to move around nor would the people sitting closest to the doors. As for utility, you can fold the second row flat to get in a lot of stuff, including your golf clubs or give your dogs more room to roam around.

Rezvani wisely gets rid of the 3.6L Pentastar V6 from the Wrangler for something with more muscle. They take, straight from Mopar, a 6.4L Hemi V8 that offers more than enough grunt while also being very easy to swap in because of the many proven modifications. Rezvani says that the Hemi is able to produce 500 horsepower to motivate the tank. We are guessing this is either because the V8 has added a tuned ECU that uses aggressive fuel mapping or because Rezvani is choosing to round up.

This Tank is one hell of a build from Rezvani who, until now, was only known for making outlandish supercars. Even though Wrangler conversions aren't something new, this is, perhaps, the most extensive one ever. There are very few people who can afford to compete with Rezvani and their incredible attention to detail. Just the suicide doors in themselves are more than what most people would do. It certainly justifies the $178,000 price tag – well to some at least.

Even when we lower taxes and create more jobs, which is in the works, that is a hefty price tag.

What does a Humvee cost again? Oh, right! Not that much!